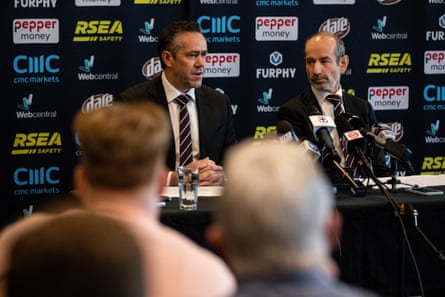 In the off-season, optimism blooms the cheek of every footy fan and club leader. Andrew Bassat, the founder of Seek and the president of St Kilda, was certainly bullish about his footy club and his senior coach heading into 2022. “I fully expect Brett to be our long-term coach and I fully expect — no pressure at all — Brett to become our second premiership coach,” he said.

For the first few months, things were tracking nicely. They weren’t exactly a team you’d cancel all plans to go and watch. But they were in the top four. Against Geelong, they produced one of the better 20-minute bursts you’ll ever see. Ratten’s contract was extended by another two years. “Brett has secured significant buy-in from his fellow coaches, staff and players alike,” Bassat said. “In addition to his strong football IQ, our players appreciate his ability to develop strong relationships, which he uses as a foundation to challenge each individual to get better and to deliver their role for the team.”

That was less than 100 days ago. From pretty much that moment on, everything petered out. It ended up being another nothing season. There was nothing to get too excited about. There was nothing to suggest good times were coming. They just poked about – a bit plain, and a bit boring. When they beat Hawthorn, Ratten implored the football world to take his team more seriously, and to give them more credit. But even his players struggled to summon the enthusiasm. Geoff Walsh, who was brought in to ship the football department into shape, said there was “a degree of irrelevance” about the entire organisation. They didn’t land Jordan De Goey. They were barely sighted during the trade period.

Well, they’re certainly relevant now. The go-to phrase these days is ‘parted ways’. But in a move few saw coming, Ratten was sacked on Thursday night. It’s a mug’s game, being a senior coach. Just three years ago, Rhys Shaw, Ben Rutten, David Teague and Ratten were all elevated to the role. None survived. Still, after the 305-day trade period finally wound up, this sacking caught most analysts by surprise. The least surprised were probably rusted-on St Kilda fans. It was all part of the cycle of being a Saints fan. They’ve seen it all before. They’d heard all the promises. They’d endured all the knifings. They could always rely on their club to let them down.

“Our model is broken and requires massive disruption, overhaul and relaunch,” former coach Grant Thomas tweeted on Friday. Thomas, as always, traffics in Linkedin-speak. It’s hard to remember the last positive thing he said about the club, or about anything really. But his comments reflect a supporter base that is at its wits end. They’ve watched every other Victorian-based club work the locks to success. They’ve watched their own club mired in mid-table mediocrity. They’ve gritted their teeth through some terrible drafting, missing out on the likes on Christian Petracca and Marcus Bontempelli. They’ve watched the club become embroiled in some utterly uninventable scandals.

And now they wait for a new coach, another reset, another mission statement, another five-year plan, another set of assurances. Lenny Hayes and Rob Harvey, two of the most beloved players in the history of the club, are both in the mix. Ross Lyon is less likely. At times, watching all his fellow panellists talk over one another on Footy Classified, he looked like a man who’s about to tear his earpiece out and walk off the set. He seems content in the world of real estate.

Late on Friday morning, new CEO Simon Lethlean and Bassat addressed the media. Bassat steered the review and it was his call to sack Ratten. Why, he was asked, should St Kilda supporters have any faith in the people running the club? “Yeah, look, there’s a few things to say about that…” he said. Extending Ratten’s contract, he said, had been a colossal mistake. The former coach was “loved and respected”. He had “dignity and class”. He was a “decent, terrific human being”. But in the space of 100 days, they’d ascertained that he wasn’t the man for the job.

St Kilda celebrates its 150th anniversary next year. It’s a celebration, as any Essendon person could tell you, that can fizzle out very early in proceedings. It has been 56 years since this club won its first and only premiership. Right now, Saints fans are probably doubting they’ll ever see the second one in their lifetime.