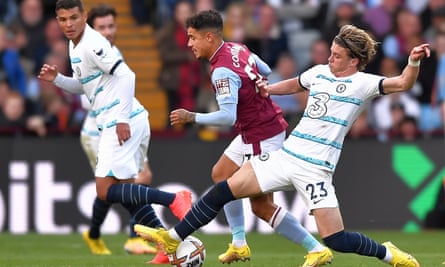 The 2018 documentary charting Steven Gerrard’s routinely astonishing life and times had sadness as a backdrop. Gerrard was – and presumably still is – scarred by events of April 2014, when that slip against Chelsea turned the Premier League title tide against his beloved Liverpool. “There’s not a day that doesn’t go by that I don’t think about what if that didn’t happen,” Gerrard said. One got the impression lows lingered for far longer than epic highs.

We were entitled to believe there would be redemption. Gerrard was in the midst of restoring Rangers’ reputation from the manager’s office. His route looked clear: from Glasgow back to Anfield, possibly via a major club in England. Gerrard’s profile as a player meant he would never need to pitch particularly hard for jobs. A hero’s journey back to Liverpool looked straightforward.

There was, however, an unspoken danger. Should Gerrard flop at Rangers or elsewhere, the notion of his replacing Jürgen Klopp on the basis of on-field exploits alone would resemble gross negligence by Liverpool. And here we are: 11 months after being appointed by Aston Villa, Gerrard finds himself out of work and further from his supposed destiny than ever.

Gerrard will take his dismissal badly. He is an intense, deep individual and unlikely to see silver linings from being so unceremoniously dispensed with. The 42-year-old has cause to ponder, or fear, what options will be available next. It is wholly realistic that Gerrard may have to rebuild in the Championship; a league which offers no guarantees.

Gerrard is due credit. First, for opting not to plod along at youth coaching level at Liverpool and instead testing himself in high-pressure managerial environments. There was also boldness – albeit some will say naivety – in accepting the overtures of Villa. Umpteen managers over the past decade have seen their CVs harmed – including terminally – by taking on the role Gerrard has just vacated. Exhibit A, Rémi Garde, who arrived in the Midlands on an upward curve but survived for 23 matches. Roberto Di Matteo was sacked after a dozen. Mention either in the context of Premier League jobs now and you will receive strange looks.

Gerrard’s tenure was longer but barely more successful. He won 12 of 38 Premier League games. The capitulation at Fulham leaves Villa one place outside the relegation zone. Seven goals have been scored in the team’s opening 11 league games. There are mitigating factors – the poor form of Philippe Coutinho and injuries to Lucas Digne, Diego Carlos and Boubacar Kamara – but Gerrard had known for some time his was a precarious position.

There is a widespread and perhaps reasonable theory that the expectations of Villa’s supporters are too high. Gerrard, though, has dealt with intense scrutiny since he was a child and has to handle the blunt reality of overseeing little by way of tangible progress. Those who insist the departure of Gerrard’s assistant, Michael Beale, was key ignore the point of results being similar with or without the Queens Park Rangers manager.

Perhaps Gerrard should have stayed at Ibrox. There, he was revered. Gerrard brought status and standing back to a club who had earlier been bundled out of European competition by a team from Luxembourg. He did so first via the Europa League, then in 2020-21 by reclaiming Scotland’s top-flight title. Yet it felt unfeasible for Gerrard to remain in Glasgow with his family south of the border.

Analysis of his performance in Scotland should not be binary. There is no question Gerrard raised Rangers’ standards. He found a way to overhaul Celtic, and pretty comfortably, to deny Rangers’ oldest foes a 10th title in succession. What happened before and after the season in question – played behind closed doors – does however raise the question as to whether this was somewhat freakish. There was audible grumbling about Gerrard’s performance as Hamilton secured a 1-0 win at Ibrox in March 2020, days after Hearts had bundled Rangers out of the Scottish Cup. Last season a squad largely the same as on Gerrard’s watch were swatted aside by Ange Postecoglou’s Celtic.

There has been a great desire for England’s modern-day international playing heroes to morph into the nation’s finest managers. Hope has never really been borne out by reality. Gary Lineker sensibly prefers sitting in a television studio. David Beckham would rather own a club than manage one. Tony Adams, now of Strictly Come Dancing fame, endured a pretty miserable time from Wycombe Wanderers onwards.

John Terry has a coaching consultancy role at Chelsea, Rio Ferdinand is a pundit and Paul Scholes lasted seven games at the helm of Oldham. Wayne Rooney may emerge as the leader in this field but a spell in charge of crisis-hit Derby County was hard to assess before his DC United team finished bottom of the MLS’s Eastern Conference.

As these legends toil, or stay well clear of the dugout, lower-league journeyman Graham Potter is the man of the moment. Gareth Southgate, not a star player in anybody’s language, may well be winding towards the end of his England reign but the fact remains he was deemed capable of taking on the esteemed post in the first place. Eddie Howe’s star is again on the rise albeit, and despite his claims to the contrary, ably assisted by Saudi Arabia’s petroleum pounds. What became of the golden age?

Gerrard’s former midfield sidekick Frank Lampard is performing a reasonable job of turning Everton around with minimal resource. Neither, though, has scaled anywhere close to heights in this career chapter which was expected of them. Gerrard has never publicly focused on his ultimate Anfield goal but we all knew it existed. For now, it is the unattainable dream.