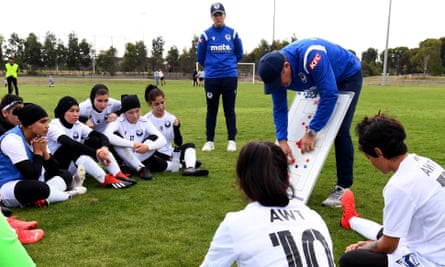 Barry Glendenning and I were on TalkSport last Sunday discussing the fact a number of Nottingham Forest fans had sung “Always the victims” to Liverpool fans the day before. It doesn’t feel controversial to suggest singing songs about tragedy and death is grim.

But before we’d broken for the ads, a number of Forest fans got in touch. Paul: “In 33 years we have gone from people being able to say any nonsense about Liverpool fans to people not being able to criticise them at all.” Michael: “This won’t be read but you’re lying, we didn’t sing anything about Hillsborough.” As David Squires illustrated so beautifully this week, it really could have been them.

Another fan texted: “But what about Liverpool fans singing about Munich?” Well, obviously. But whataboutery aside, is this determination to defend your team at all costs a new thing? Or are those incapable of judging their club objectively the ones who shout the loudest, now weaponised by social media? This obsession with agendas is so tiring and just another reason to question your faith in the game.

What are we watching now? Clubs owned by countries where there is significant discrimination against women and homosexuality is illegal, pouring virtually infinite resources into an increasingly uneven league. A player bailed on suspicion of rape continues to play, while fans in the ground sing in unison about the tragedies where opposition fans lost their lives and those online racially abuse any non-white player who makes the slightest mistake. Unfit improper businessmen pass fit and proper persons tests to buy lower-league clubs and strip their assets. All before we focus our attention on Qatar, where thousands of migrant workers have died since Fifa awarded the country the World Cup in 2010.

It’s hard not to get disheartened. But even if football is destined to be run by people who don’t have its best interests at heart, can we find enough kernels of hope in the gloom? This week I asked on Twitter for examples of people in the game – clubs, players, fans, whoever – doing good, however small. Thanks to those who replied about people picking up litter all the way to caring for footballers seeking political asylum. It’s not exhaustive and it won’t win a Pulitzer. You may find it a bit twee but here’s a list in no particular order that may restore your faith for five minutes:

So many people got in touch to talk about the tireless work done by the fans supporting food banks: Newcastle, Everton, Burnley to name a few.

Lewes are the first gender-equal club in the world. Their midfielder Bradley Pritchard runs a community garden.

Melbourne Victory have been hosting and paying for Afghanistan’s women’s team since the Taliban came back and they fled the country.

Witham run weekly Soccability sessions for people with additional needs to play football and socialise at no cost to them or their parents.

The Bracknell chairman is buying 50 tickets from the allocation for the FA Cup game against Ipswich to give to struggling families.

Norwich cancelled a betting sponsorship because of letters and complaints from fans.

Bristol City make donations to a food bank or homeless shelter on every away trip.

Sunderland have partnered with Spacehive, a local mental health charity, helping tackle some of the highest male suicide rates in the country.

You may have seen Danny Ings wearing headphones walking out at Villa Park last week. He joined Riley Regan from the club’s disability programme who wore ear defenders to protect him from the noise of the crowd. At the same game, Ollie Watkins went to find a young disabled Brentford fan called Woody after full time and had a penalty shootout on the pitch with him.

There were so many responses praising the work of Yasir Sufi, the integration and development manager at Blackburn, who does so much to integrate supporters from all backgrounds to the club, including hosting prayers on the pitch during Ramadan for Muslim supporters.

Arsenal, Newcastle, Brentford and many other clubs give free sanitary products for women.

A group of young Wigan fans helped the Canal & River Trust on a litter pick on the stadium’s section of the canal this week.

Plymouth work with Project35 to support children living in poverty in the local community and aim to reduce that figure.

Hearts’ two most recent front-of-strip brandings have been with Save the Children, and now MND Scotland.

A Cambridge fan has created an app called Picturepath that can be used by people with autism and special needs to help them with matchdays. It’s been used by several EFL clubs.

Allan Saint-Maximin bought all the toys at a toy shop for kids in Newcastle.

The Brighton medical team have saved seven fans’ lives at the Amex. Last Tuesday, they rescued Bob, a Nottingham Forest fan, who had a heart attack just before the match.

Kings Langley have partnered with Druglink and are providing volunteering opportunities for service users, education around drug use to young players and are helping to reduce the stigma attached to those in recovery.

Finally, Rob Mason wrote to me. “What Manchester City did for my son in May following the death of his 14-year-old sister in March was uplifting during the darkest of times.” His son Ben has raised more than £100,000 for mental health charities since his sister took her own life. He was invited to hand the medals and trophy to the players after the game with Villa last season.

There is so much good going on all the time, so many volunteers from grassroots to the top of the game – most completely unrecognised. It made me feel better about the sport I work in for just a little bit.

Max Rushden has donated the fee for this column to Shelter From the Storm, the homeless shelter he has worked at for the past decade, although he doesn’t like to talk about it and finds the commute trickier these days.