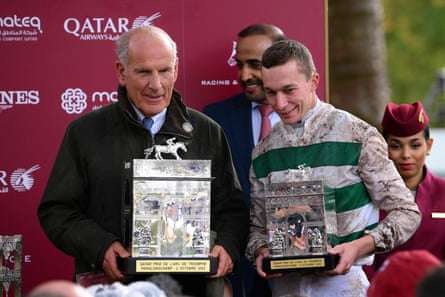 Baaeed was back home in Newmarket, Christophe Soumillon did his best to spoil the build-up and Alpinista, the winner, could struggle to make the top 10 when the international handicappers’ annual ratings are published in January. And yet, many racing fans will fondly recall the 2022 Prix de l’Arc de Triomphe long after a few of those to come have started to merge together just a little in the memory.

There was a time, even within the living memory of older generations of racegoers and punters, when a 50-horse yard such as Sir Mark Prescott’s Heath House, with the backing of a wealthy and committed owner-breeder in Kirsten Rausing, could challenge for the trainers’ championship if the stars aligned.

The huge influx of sovereign wealth into British racing since the 1970s has changed the game completely. Prescott, in his 54 years in charge of the oldest and most historic yard in Newmarket, has watched as strings ballooned to 100, then 150 and now, in a few cases, 200 or more. The town has become a global powerhouse in an internationalised sport, but a place where size is generally all that matters.

Alpinista’s half-length success at Longchamp showed that, very occasionally, racing’s traditional values can still win the day. The five-year-old mare, whose dam and grand-dam were both trained at Heath House before her, thrived thanks to the care and attention to detail of a trainer who stubbornly refused to build more boxes.

Her jockey, meanwhile, was an essential player in the story too. Luke Morris is just the third stable jockey at Heath House – after George Duffield and Seb Sanders – since 1974, and as familiar a name to committed punters as any in the game thanks to his insatiable appetite for hard work. Morris has had at least 1,000 rides every year since 2010, and more than 1,500 in five of those 12 campaigns.

Morris had four rides at Wolverhampton on Saturday evening before heading to France on Sunday morning, including a 100-1 chance that finished ninth of 10, and had six booked rides at the same track on Monday, all but one of which are expected to start at double-figure odds. He was making his debut in Arc on Sunday, around a track which takes some knowing, but rode a flawless race on Alpinista, justifying the faith of the punters who supported her down to favouritism in the process.

He also relegated Soumillon, on Vadeni, to second place, no doubt much to the relief of France Galop’s senior executives after he took his rides on Saturday and Sunday despite elbowing Rossa Ryan from the saddle mid-race at Saint-Cloud on Friday.

Alpinista’s win was, in other words, the perfect result for all concerned, and after the teething problems with the new Longchamp grandstand, the travails of Covid-19 and then an 80-1 winner that left fans more perplexed than jubilant, also the shot in the arm that Europe’s greatest race needed.

Countless acres of newsprint and gigabytes of bandwidth were devoted to whether Baaeed, the unbeaten International Stakes winner, would – or should – run in the Arc, before he was finally ruled out in mid-September.

In the end, he was not missed at all, and William Haggas’s colt will no doubt complete an unbeaten career with a lap of honour in the Champion Stakes at Ascot on Saturday week. But he will almost certainly not end the year as the world’s top-rated horse – that honour seemingly having been claimed by the US-trained Flightline, whose Timeform rating rose to 143, just 4lb shy of Frankel’s 147, after an astonishing win in the Pacific Classic at Del Mar in September.

But there is much more to a memorable racehorse and performance than a number on a handicapper’s spreadsheet, and an event with the Arc’s history and tradition does not necessarily need all the best horses to be the best race of the year.