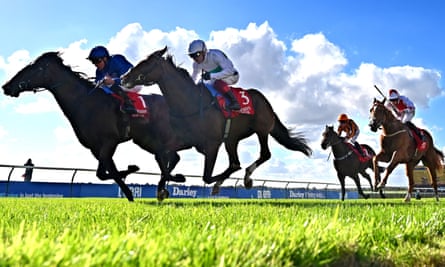 For a venue that was built on expecting the unexpected, and on an afternoon that veered from bright sunshine to downpours and back again, there was an odd sense of certainty as Cheltenham opened the doors for its new season on Friday. The Festival in March has been a four-day meeting since 2005, and despite years of debate, speculation and rumours that a fifth day was all but inevitable, the track announced earlier this week that that is how it will stay.

More than 3,000 of Cheltenham’s 8,000 or so annual members responded to a survey on a fifth day, according to Ian Renton, the track’s managing director, and it is fair to assume that a substantial majority were not in favour.

“It’s a very high proportion [of the annual members],” Renton said on Friday, “which shows how much interest they have in what we’re doing here.

“It’s probably the most extensive exercise I’ve ever been involved in and it’s been incredibly valuable, I don’t think anyone can ever say never, but for the foreseeable future, we will be running a four-day Festival.”

Paddy Brennan probably spoke for many as he returned to the weighing room after the first race here on Friday. “It’s fine as it is,” he said, as if there was clearly nothing more to add.

And while local trainer Martin Keighley, a winner with Found On later on the card, “wouldn’t be against a fifth day”, quality is everything. “We just wouldn’t want to lose the quality,” he said. “We’d all love to be here and the jockeys would love to ride in more races and trainers would like more chance of a Cheltenham winner, as long as it doesn’t make the racing weaker.”

Even bookmakers, among the biggest beneficiaries of what is now the most important betting Festival of the year, were believed to have been agnostic, at best, about the idea of extending to Saturday.

One on-course rep said on Friday that his firm had a pre-prepared press release, in the expectation that a fifth day would go ahead, which was less than ecstatic about the prospect. “Field sizes weren’t great last year,” they said. “It could all get diluted. There is such a thing as too much racing”.

More money was bet on the last race at Cheltenham’s 2022 Festival than was staked on the Derby, the Flat’s premier race, three months later. That rush by the betting public to grab a last precious piece of the Festival action simply would not happen on a Saturday evening when the football results are starting to arrive.

When Cheltenham took a deep dive into its customer base, it seems that the mood against a fifth day among racegoers was so strong that the only choice was to listen. The track, though, could also point out that it has maintained a long upward popularity curve for at least three decades by knowing its customer base, creating an exclusive brand and shrewdly matching supply with demand.

The attendance at this year’s four-day Festival overtook the five-day Royal Ascot for the first time. But having packed in 74,000 fans for the final two days of the 2022 Festival, the decision to cap attendance at 67,500 every day from next year will probably see the showpiece meeting drop back to being the fourth-most attended British sporting event of 2023.

Few, if any, of the pre-Festival cards here ever drop below a five-figure crowd, and with a fifth day at the Festival apparently consigned to history, around 10,000 spectators on Friday could turn their attention to horses that might feature over the four days next spring.

That could yet include Straw Fan Jack, who beat Gordon Elliott’s Ash Tree Meadow, the 2-1 favourite, in the second race, a reminder to the sport’s fans that even now, smaller yards can still land a blow on National Hunt’s greatest stage.

Until last year, Sheila Lewis, who saddled Straw Fan Jack, was combining her training career with work in a nail salon near her base in Powys.

“I was going to do cartwheels coming into the winner’s enclosure but I was being interviewed,” Lewis said. “How you can you imagine what this means for a small trainer like me? I was in the salon painting nails a year ago but quit to train full time. This is a massive dream come true.

“The Arkle [on the opening day of the Festival next year] probably crossed my mind before he won, but I’m far too modest to take it seriously. I’m small-time, and it’s amazing to have a horse that can go on the road to a race like that.”

Epictetus can lift Trophy for Gosden

The Vertem Futurity Trophy is one of a handful of British Group One events that John Gosden has yet to win but the trainer has an obvious chance to fill the gap on his CV at Doncaster on Saturday, when victory for Epictetus (3.35) would also frustrate Aidan O’Brien’s pursuit of a record-breaking 11th win in the race.

O’Brien’s big hope is Auguste Rodin, likely to set off at a shade of odds-on after winning a Group Two event last time out, but Epictetus ran to a similar level to finish a neck behind Silver Knott in a well-run renewal of the Autumn Stakes earlier this month.

That was Epictetus’s first race for three months and also only the second of his career, and he looked certain to build on the experience. At around 4-1, he is an excellent bet to finally get his trainer on the board in the last Group One of the British season.

Newbury 1.50 This is a big step up in class for Grey’s Monument but Ralph Beckett’s colt has been transformed by blinkers on his last two starts in nurseries and earned this tilt at a Group Three by powering six lengths clear in an eye-catching time at York earlier this month.

Cheltenham 2.05 The Hollow Ginge’s form tailed off after his close second in this race last year but he is 10lb lower in the weights now and this could be the day to catch him fresh.

Newbury 2.25 Hamish looks the most reliable option here as he scarcely came off the bit when successful at Group Three level three weeks ago.

Cheltenham 2.40 Spectators will hope for a re-run of last season’s Grade One juvenile hurdle at Aintree, when Knight Salute and Pied Piper dead-heated before the latter was demoted for causing interference. Milton Harris’s gelding improved by the run last term and is marginally preferred at the likely odds.

Doncaster 3.00 Bresson, a son of the useful Shutter Speed, will appreciate the drop back to six furlongs after being caught close home at Salisbury last month.

Cheltenham 3.15 The front-running Editeur Du Gite could get a soft lead and is a decent bet at around 7-2 to add to his excellent record over track and trip.

Cheltenham 3.50 Botox Has was the 20-1 outsider of six runners for the Grade Two National Spirit Hurdle at Fontwell in February but there was no hint of fluke about his gritty success and the form was backed up by the clock.

Doncaster 4.10 The veteran Copper Knight dead-heated for this 12 months ago off an 8lb higher mark and hinted at a return to form at Catterick last time. He looks big at around 18-1.