TikTok has announced that it’s increasing the minimum age requirement for live-streaming in the app, while it’s also adding a new ‘adults-only’ live-stream category, as well as new keyword filtering options for live comments.

In combination, the new updates could play a big role in improving the safety of its live-stream offering. First, on the new age limits for live-streaming in the app.

“Currently, people must be aged 16 or over to host a LIVE. From November 23rd, the minimum age will increase from 16 to 18. As we consider the breadth of our global audience, we already take a graduated approach to the features that our community can access based on their age; younger teens need to be aged 16 or older to access Direct Messaging and 18 or older to send virtual gifts or access monetization features.”

This is good move. TikTok has already come under much scrutiny over the ways in which it incentivizes young people to post provocative, potentially risky material to grab the attention of viewers. Live-streaming takes this to another level, as people can interact with the broadcaster in real-time, which potentially puts teens even more at risk.

As TikTok notes, over time, it’s been forced to reassess its various features and tools to ensure that teens are not unwittingly putting themselves at risk in the app. This update is the latest step in this, and it’s good to see TikTok working to take a more measured approach on this element, even at the risk of losing a level of user engagement as a result.

In addition to this, TikTok’s also launching a new option that will enable broadcasters to restrict their live streams to ‘adult audiences’.

“For instance, perhaps a comedy routine is better suited for people over age 18. Or, a host may plan to talk about a difficult life experience and they would feel more comfortable knowing the conversation is limited to adults. We want our community to make the most of the opportunities LIVE can bring without compromising on safety.”

That, seemingly, might also see TikTok lean into even more controversial areas with its live broadcasts, if it has the license to do so via adults-only streams, though TikTok’s current guidelines do include definitive rules against nudity and sex-related content, and at least for the time being, TikTok’s not looking to lessen these restrictions.

Though it is interesting to consider how social platforms could view such, in light of recent revelations that Twitter, at one stage, did consider leaning into adult content. TikTok is clearly not taking the same approach, and has not suggested, in any way, that it may look to revise its rules on this front. But the addition of adults-only qualifiers could provide alternative scope.

On another front, TikTok’s also looking to provide more guidance for live broadcasters to help them better moderate stream comments, with new reminders that will suggest key terms that they may want to consider adding to their filter list. 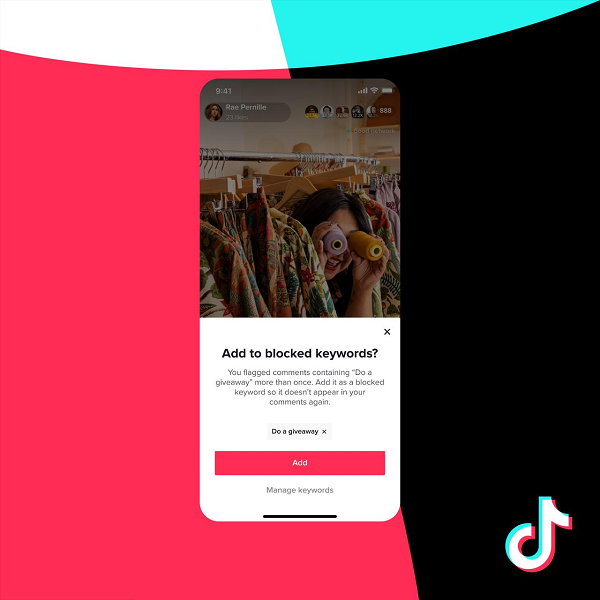 As you can see in this example, the updated tool analyzes the types of comments that a creator has most commonly removed from their streams, then suggests similar words and terms that the host may want to add to their filter list.

“When we tested this feature, we found that it nearly doubled those using keyword filtering when looking at the most popular LIVE creators.”

That could make live-stream management much more… manageable, by streamlining the process of filtering out unwanted comments, and keeping the conversation more focused.

Finally, TikTok has also officially announced the expansion of its Multi-Guest feature for TikTok Live, which enables users to broadcast with up to five guests at a time using a grid or panel layout.

TikTok initially launched live-stream guests last July, with only one guest slot available in split-screen mode. But now, you’ll have much more capacity to host live discussions in the app, which could open up new opportunities for panel chats, live TV viewing sessions, etc.

And for brands, it could also provide new ways to showcase or preview your latest products, facilitate creator collaborations, run fan Q and A, show different aspects of your business, and more.

These are some valuable updates for TikTok’s live-stream offering, and with TikTok still pushing to make live-stream commerce a thing, they could also serve a key role in maximizing take-up and utility, making it a bigger consideration for more eCommerce businesses and influencers in the app.