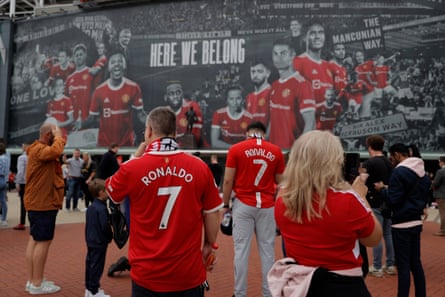 Cristiano Ronaldo trained alone on Friday. In a way it was the perfect image: a footballer who perhaps more than any other embodies the trope of the individual superstar, the idea that one man can do it on his own, doing it on his own. The television cameras were there to film his arrival and they were there a few hours later to film Erik ten Hag as he weathered a squall of Cristiano-related questions. The soap opera continues. But for now the football career is on hold.

Ronaldo will not feature for Manchester United against Chelsea on Saturday afternoon. He has been suspended for storming down the tunnel after refusing to come on as a substitute against Tottenham on Wednesday. The word is that United will again try to move him on in the January transfer window, and may even pay him to leave.

Perhaps we should have known that this was how it would end from the moment Ronaldo returned last autumn in a blizzard of ticker-tape and social media numbers. But nobody involved – not United, and certainly not Ronaldo himself – was prepared to shake themselves from a shared reverie that would disintegrate upon its first contact with reality.

For United, it was a reality borne out in results and dysfunction. For Ronaldo himself, reality has taken the form of time. The fact that he is 37 years of age is no barrier in itself: Thiago Silva is still turning out for Chelsea at 38, Fabio Quagliarella and Pepe are doing it at 39 for Sampdoria and Porto respectively, Joaquín is pounding up and down the wing for Real Betis at the age of 41. Ronaldo remains in excellent physical shape, and as he proved against Everton a fortnight ago, there are still few deadlier finishers. He ended last season with six goals in five appearances.

But what has changed is the game around him: a sport in which players are covering ever greater distances, at an ever higher intensity, to an ever more intricate and complex series of technical instructions. What has changed is the concept that one player, however talented or driven, can be given free rein or have a team built around him. The very principles upon which Ronaldo built not just his game but his fame, not just his career but his entire psyche, are eroding in front of his eyes.

What must this feel like? How is Ronaldo experiencing the world right now? In part these are questions that are impossible to answer, and so for various reasons people have stopped bothering to try. Far easier to paint him in broad primary colours, as either a cartoon villain or a vengeful demigod, to reduce his human complexity to numbers, his human emotions to ciphers. Fans who just months ago hailed his second coming as the second coming are now urging United to sweep him aside, to cast him adrift.

In April, Ronaldo and his partner Georgina Rodríguez lost their newborn son in childbirth. He was one of twins; their daughter survived. Rodríguez would later describe this tragedy as “the worst moment of her life”. For Ronaldo it was “the greatest sadness”. In the subsequent days the world of football rallied around Ronaldo at this most awful of times. Then, as the world of football is wont to do, it moved on to other things.

Did Ronaldo move on to other things? Nobody on the outside can say with any great certainty how this tragedy might have affected him. Every family processes grief in its own way. But anybody who has lost a child will tell you that it is a life-changing moment: a sadness that defies words or solace, whose vapour trail is felt not simply for weeks or months but for years, and for ever.

Again, nobody here has a direct portal into Ronaldo’s brain, and ultimately we must all bear responsibility for our own actions. But I suppose the point here is that if one were to cast judgment on a man making a seemingly irrational emotional outburst – say, on the touchline during a televised football game – might this be the sort of thing you would want to take into account? If only a little, if only for reasons of simple compassion? Or is six months beyond the statute of limitations for these things?

And then of course you can throw in the sense of athletic decline, which is often described as a form of sporting death, a brutal reacquaintance with one’s own mortality. For Ronaldo it is reasonable to presume that this reckoning will hit him harder than most, given the peaks he scaled and the levels of self-belief required to sustain them. Ronaldo will never be remotely as good at anything else as he is at football. Now, with decades of life to live, this thing is slipping away from him.

United knew this, or at least should have done. Instead, they chose to sink more than £60m in fees and wages into a 36-year-old striker with seemingly no idea of what their exit strategy might be. In a way both United and Ronaldo were happy to indulge in the same delusion: that the good times would simply keep on rolling, that reality could simply be wished away through branding, star magnetism and sheer will. It was the ultimate marriage: a company convinced of its own immortal pre -eminence and a player convinced of his.

But of course companies can pivot, remake and reinvent themselves. Humans are stuck with the body they have. Even now, there are choices to be made. Ronaldo could simply knuckle down, take his medicine, accept a diminished role in an evolving team, acknowledge his limits. But to do so would be to go against every trait and instinct that drove him to the top in the first place. And so as United forge ahead, Ronaldo simply waits: alone, imprisoned by time, quietly going the way of all flesh.