Twitter’s looking to further enhance smaller community engagement in the app, with the launch of a new test that will enable Communities admins to create dedicated audio Spaces within their groups.

starting today we’re rolling out the Community Spaces test where some admins + mods will be able to host Spaces in their Communities pic.twitter.com/gdlxR9IZiH

As you can see in this example, now, some Community admins on Twitter will be able to launch audio chats, which will only be visible within the group.

“With this experiment, a group of admins and moderators in the US will receive access to create live Spaces within their Twitter Communities. Audio in Communities adds an extra layer of personality and connectivity beyond 280 characters; by initiating live audio conversations specific to a Community and topic, Community admins will be able to better lead their Communities, engage their members, and participate in quality conversations with others who share the same interests.”

When a Space is launched within a Community that you’re a member of, it‘ll be highlighted in the Space bar at the top of your home timeline, giving all group members an opportunity to listen in. Users visiting a community will also be able to see and join a Space started in that group, but only members of the host community will be able to reply and engage in the Space. 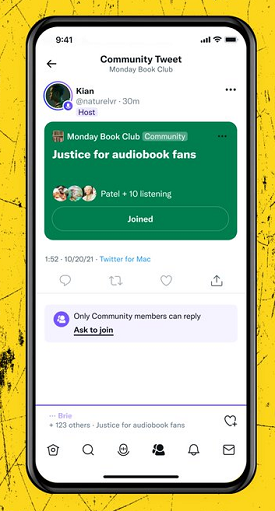 It’s somewhat similar to Reddit’s Reddit Talks audio chat option, which sees audio chats hosted within Reddit communities, and Facebook’s Community Audio Channels. Facebook, of course, has largely abandoned its broader social audio push, which had been sparked by the sudden rise of Clubhouse, and overall, enthusiasm for audio engagement options has died down, though there may still be niche use cases for chat tools like this.

The benefit of this approach, specifically, is enhanced discovery. You join groups that are focused on topics that you’re interested in, which means that the audio chats you’ll ideally then see in the app will also be more aligned with your interests.

As it stands, Twitter’s still having trouble highlighting the most relevant live audio chats to each user in its Audio tab, because for one, you can’t know what people are going to talk about in a Space while it’s happening live, and two, Twitter’s algorithms are not so great at showcasing content based on your interests.

Twitter’s tried to solve this by adding topic tags in Spaces, and more recently, topic streams in audio tab, which enables users to have more direct input into their experience.

Chats in Spaces will provide another way to better filter this, and highlight the most relevant chats to each user – and if it takes off, it could become a strong engagement element in the app.

Though that also depends on whether people are actually using Twitter Spaces and/or Communities. Twitter hasn’t provided any usage info on either for some time, and in general, it doesn’t seem like a lot of engagement is happening in each.

But maybe, this will be another way to enhance community engagement, which could help to unlock the potential of both options in future.

And for brands, it could also provide another way to build more focused engagement in the app, via your own branded communities. You could, for example, host exclusive interviews for your top fans, or provide previews in audio rooms.

It could actually be a valuable addition, and it may be worth experimenting with the option to see how people respond.