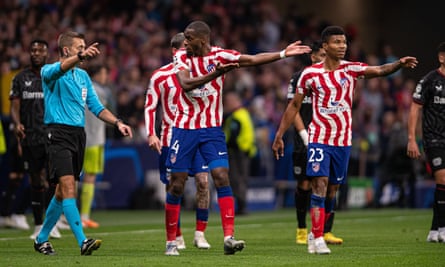 Confusion reigned on Wednesday night. In the white-hot heat of the moment, players, pundits and fans at Tottenham filming reaction videos on phones failed to grasp the intricacies of the offside law. Even the person helming the Guardian’s Champions League clockwatch – me – was very far from sure.

Could Harry Kane be adjudged offside if Emerson Royal nodded Ivan Perisic’s excellent deep cross backwards? Could Kane be offside if the ball flicked off a Sporting defender before being tucked into the net, seemingly earning Tottenham a stirring comeback victory and a place in the last 16?

The answer in both cases was yes, but in sitting rooms and pubs across the country, on TV and social media, claim and counter-claim flew. Emails from readers rained down: “Spurs didn’t mind VAR against City in 2019!”

One person wrote in to demand that comments be activated on the live blog, so readers could thrash it out among themselves. Don’t we just love the smell of a comically controversial VAR decision? Even out on the pitch, Tottenham’s Eric Dier was heard remonstrating with the referee after the final whistle. “The ball went backwards!” “It’s offside,” replied the immaculately coiffed Danny Makkelie, with a polite and distinctly self-satisfied smile.

“I don’t really know what happened at the end,” the Spurs defender Matt Doherty chipped in later, speaking to BT Sport in the bowels of the stadium. “I’m going to have to look at the rule book, because there’s a few of us in there who don’t have a clue what just happened.”

Tottenham’s players were not the only ones. “We all grew up playing football,” said Rio Ferdinand in the studio. “If the ball went backwards, it was always in your mind: ‘It can’t be offside.’ Obviously that rule’s changed.” In fact, the ball’s direction of travel has never been relevant, but as Ferdinand correctly illustrated, the idea has become deeply, seemingly intractably, lodged in the minds of people who have played and watched the game for decades.

Do the laws need simplifying, do people need educating, or both? It is fair to argue that anyone expressing an opinion on these regular flash points should first educate themselves.

Yet it also seems relevant to acknowledge that there will continue to be ignorance. The rights of the “football family” to espouse poorly informed views should – arguably – be defended at all costs. Until we are all forced to sit regular exams, this will keep happening, although perhaps the players should be better acquainted with the laws.

Aside from all that confusion, the five minutes it took to produce a decision was surely unacceptable and a terrible look for the sport. No one who watched, in the stadium or on TV, could agree that semi-automated offside technology enhances the flow of the game, as Uefa claimed in a pre-tournament statement. And if Kane was offside by an inch, wouldn’t a sane sport give the benefit of the doubt to the attacking side?

“Either you want the decisions to be right or you don’t,” argue the VAR advocates, ignoring the fact that the pictures available are arguably inconclusive, and that in a wider sense, plenty of mistakes happen even after interminable VAR checks.

Ultimately, though, this isn’t really about whether Kane was fractionally offside. As Glenn Hoddle said, it’s about the theft of simple joy. It’s about the mildly depressing fact that a goal can’t properly be celebrated until the VAR check, sometimes taking several minutes, is complete. “People in the stadium, they’re not going to come to the stadium any more,” Hoddle said. “It’s exhausting the game, taking away the exhilaration of seeing your team score a goal.”

“I don’t want to be drawing lines,” said Peter Crouch, also on pundit duty. “What are we in football for? The buzz, the emotion.” Ferdinand agreed: “It takes the fun and the emotion away.”

The Kane incident was not even the most ludicrous VAR episode of the night. In Madrid, the referee blew the final whistle on Atlético’s 2-2 draw against Bayer Leverkusen. Uefa’s website displayed “full time” next to the scoreline. Diego Simeone’s side were out of the Champions League.

But there was more to come, a penalty awarded after the final whistle – dramatically saved by Lukas Hradecky, headed on to the crossbar and finally out to safety via a deflection off Yannick Carrasco, who had struck the spot-kick.

Even then, the referee had to check whether Hradecky had stayed on his line. It was an undeniably dramatic denouement. It also felt, alongside the wait for the Kane decision, like a bit of a shambles.

Getting decisions right is clearly important, but so too is a coherent and compelling narrative. As fans we want – no, we need – to stay in the moment. VAR may bring us, on balance, a greater proportion of correct decisions. But something more important is being lost.