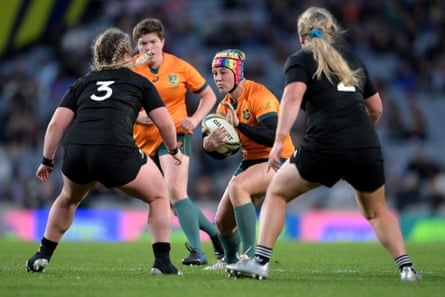 For half an hour, romance had trumped realism. As Australia romped to a 17-0 lead over New Zealand, with 19-year-old Bienne Terita scoring two tries in only her second Test, and the evergreen Sharni Williams cutting holes in midfield in her fourth World Cup, we began to wonder if maybe, just maybe, conventional wisdom could be suspended and give way to something magical.

Maybe a rag-tag group of amateurs could beat one of the sport’s powerhouses. Maybe money wasn’t the key ingredient to success. Maybe a World Cup title in one code could shift the paradigm in another.

“We were obviously buzzing at the time,” Terita said after breakfast at the team hotel in Whangarei, North Island, where the Wallaroos will take on Scotland in their second match of the campaign on Saturday. “We knew there was a long way to go but we thought we could hold [the lead]. We were playing so well, executing perfectly. Everything was going according to plan.”

But, to paraphrase Mike Tyson, everyone has a plan until Portia Woodman gets the ball. The Black Ferns winger scored the second of her three tries seven minutes after the restart to restore parity at 17-17. Six minutes later, Australia were down to 13 players when Ivania Wong and then Shannon Parry were shown yellow cards within seconds of each other.

“That made the job difficult, but that’s footy, sometimes it comes down to the rub of the green,” Williams said. “But we’re not looking for excuses for the result.”

The final score of 41-17 was a consequence of more than just a 10-minute spell with two players in the sin-bin. The closing stages saw a relentless stream of black waves wash over flailing bodies in gold. It was clear one side had more in the tank than the other. That’s understandable given the dynamics of the two squads.

New Zealand are fully professional and benefit from a year-round regime that allows for adequate rest and recovery between training sessions and after matches. The Wallaroos are comprised of teachers, physiotherapists and labourers. Their recovery time is often spent on their feet attending to their day job.

Williams and Terita are the exceptions. They’re contracted with Rugby Australia’s sevens programme and enjoy all the advantages of a full-time rugby life. It is no coincidence that they are also World Cup champions, having lifted the title in Cape Town last month.

“You don’t think of those things when you’re on the field,” Williams said. “But I guess it does show what’s possible with proper investment and support. We’re hoping that our success can rub off on the squad. But not just this squad. The Wallabies as well. We were flying the flag for Australian rugby. We showed that we can win tournaments.

“That is what you try to embrace, that winning mentality. We try to get other people to believe in what they’re capable of. When you don’t play a lot of footy constantly, it can be easy to put limitations on yourself. That is what BB [Terita] and I bring. We train every single day. We’ve got the belief because we know what is possible.”

Williams is not only a potent weapon from outside centre, capable of unlocking defences with a well-timed run against the grain or sending the ball wide at pace. She also considers herself a key communicator in the team, a bridge between what has come before and what the future holds.

At the last World Cup in Ireland in 2017, Williams played at university grounds in front of a few thousand people. On Saturday, she took part in an exhibition that set the attendance record for a women’s rugby match as more than 40,000 fans packed Eden Park.

“I find myself talking a lot about, ‘back in my day’,” Williams says, affecting an older voice far beyond her 34 years. “I’m so proud of where the game is right now. We’ve been talking about this stuff for a long time. It’s amazing to be living it. Women have been playing rugby since before the war. If they’re still around I reckon they’re super proud as well.”

Terita is conscious of this heritage but represents a new generation, stating her intention to “stay in the moment”, eager to entertain to the cacophony of a full stadium, appealing to an audience beyond the imaginations of her forebears.

She is active on Tik-Tok, dancing to hip-hop beats and goofing around with her friends. “I try to get the other girls to get involved,” she said, wryly. “Especially the older girls. Mostly because they hate it. I find that funny. I love getting girls who wouldn’t normally do it. Because it gets them out of their comfort zone. I love bringing lots of positivity off the field. We play a free flowing style on the field so it’s important we also have a lot of fun off it. I think that’s part of my role.”

Her primary task is scoring tries. She’s proved she can do that. If she can do so again her side has every chance of beating Scotland and then Wales the week after and qualifying for the quarter-finals.

“We’re confident,” Williams says. “We know we can win big games. BB and I have done it before.”