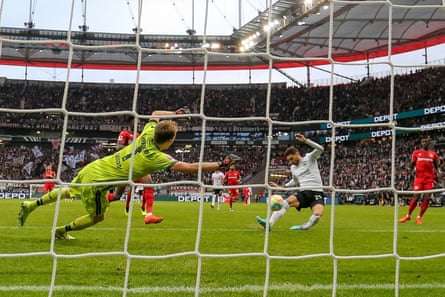 This was it. The start of the Xabi Alonso-as-coach story, where one of the most natural schemers in a midfield would prove himself as adroit and successful with the backdrop of the touchline. If there was any assumption that his former Liverpool teammate Steven Gerrard would be a certain type of manager based on his assurance as a player, that perhaps goes double for Alonso on the back of three seasons of displaying his philosophy at Real Sociedad’s B team.

The view for a while has been that Alonso is so cerebral that he should be on an inexorable path to familiar ground at the top, with an eventual return to Bayern Munich earmarked by Karl-Heinz Rummenigge back in 2020 (“he will be a coach who may be of interest to Bayern at some point in the future”) and reflagged since his arrival at Bayer Leverkusen.

He seemed to have found the perfect ramp in that direction. There are few Champions League-level clubs where the pressure is milder than Leverkusen. Alonso will have time, space, less fervent fans breathing down his neck than at many of the club’s Bundesliga peers (think just down the road at Borussia Mönchengladbach, a role that Alonso could have easily ended up in), plus plenty of talent and a budget to refine his squad within reason.

We might consider – perhaps especially so in the light of Gerrard’s current struggles – if we shouldn’t be talking about chucking someone the keys to the Maserati before they’ve passed their driving test, especially given the escalation of Alonso’s opening days in situ. His Bundesliga debut was a breeze: a 4-0 win over Schalke at the BayArena, with Alonso’s light autumn jacket still lightly swinging on the coat stand in his new office. Subsequently the real size of his task has become more apparent.

There was an argument that the midweek Champions League defeat by Porto had been unjustly harsh against canny opponents. Saturday was a different story. Leverkusen were visiting Eintracht Frankfurt, coming off their own Champions League exertions and less used to the schedule churn, with fewer resources to deal with it than Die Werkself.

Dear Xabi, meet rude awakening. “If you lose 5-1 and the opponent’s manager not only speaks of a ‘deserved’ victory for his team,” wrote Stephan von Nocks in Kicker, “but also criticises their ‘wasting chances’, as Markus Krösche did to Sky, then it’s red alert.”

Players of the quality of Patrik Schick, Moussa Diaby and Jonathan Tah, to name but three, are way short of their best, which spells trouble for Alonso, who replaced Gerardo Seoane. “The problems don’t go away with the coach,” insisted Robert Andrich. “It’s still those on the pitch who are responsible for it.” His midfield colleague Kerem Demirbay put it more succinctly: “We’re in deep shit.”

There is no argument there. If you wanted the juxtaposition of talent versus form in a tidy individual package from this latest setback, take Piero Hincapié. The defender conjured an equaliser 10 minutes into the second half with a Van Persie-esque diving header and, from there, was the protagonist of a sequence that torpedoed Alonso’s afternoon in less than 15 minutes. Two minutes after his goal, Hincapié was caught dozing as Randal Kolo Muani beat him to Christopher Lenz’s cross to edge Eintracht back in front. Then his misjudged header on the halfway line allowed Jesper Lindström to streak away and lift home a crafty finish for the third. To top it off, he brought down a rampaging Kolo Muani with a last-ditch challenge to (eventually, after VAR consultation) give the hosts a second penalty of the afternoon, which Daichi Kamada rattled away as he had the first, by which point Hincapié had received a second yellow for the foul. The time that elapsed between Hincapié’s header hitting the net and his desperate lunge on Kolo Muani was 11 minutes and 52 seconds.

It is, so far, one of those seasons for Leverkusen. The 20-year-old Hincapié is a player of considerable potential but he, like his team, is in a tailspin at the moment. When former Leverkusen striker Lucas Alario apologetically scored the fifth in the closing minutes, every bit of good work done against Schalke had been undone, goal-for-goal.

If they were in the game before that quarter-hour implosion it was only so in theory, not practice. Leverkusen had been clinging on by their fingernails up to then, given the run-around by Good Eintracht (you never really know whether they or Bad Eintracht, distant relatives in the guise of the same team, are going to turn up this season), with the reunited duo of Kolo Muani and Mario Götze pulling their guests one way and then the other. The awful truth for Leverkusen is that they got off lightly here.

Today they sit in 16th place, synonymous with the relegation playoff spot, with only eight points from 10 games and with just the thus-far-hopeless Schalke and Bochumbelow. Fellow strugglers Wolfsburg are up next at home, and questions of philosophy and vista will wait. Alonso and his team need points already, and fast.

The first instalment of the Bundesliga’s Super Sunday was Union Berlin remaining top by comprehensively beating Borussia Dortmund 2-0, putting them away with an economy and ruthlessness that has become their trademark. A first-half Janik Haberer double did the job – the first taking advantage of an air kick by Gregor Kobel, and the second a zinging drive from the edge of the area. Their immense, dogged second-half defensive display was even more impressive when you consider they had two days’ less rest than BVB, having battled to the end to beat Malmö late on in the Europa League on Thursday. What would Edin Terzić give for a team with the structure and personality of Union?

Part two was super for Bayern, who gave us their most convincing domestic display since the opening day but less so for Freiburg, who remain third despite being on the wrong end of a 5-0 scoreline. The excellence of Eric-Maxim Choupo-Moting in a centre-forward role will continue to stoke debates on replacing Robert Lewandowski like-for-like – though Julian Nagelsmann was delighted with their renewed swagger, the implication of Choupo-Moting with Serge Gnabry, the in-form Leroy Sané and company was unmistakable.

In the week that they finally fired Pellegrino Materazzo, Stuttgart got their first win of the season, eventually easing past Bochum 4-1 with Silas’s brace recalling happier times under the deposed coach.

Marcus Thuram’s excellent double for Mönchengladbach wasn’t quite enough for a win at Wolfsburg, but he is now up to seven for the season and offers their campaign real hope of hitting the heights. “Thuram’s a world-class striker,” enthused Wolfsburg’s sporting director Marcel Schäfer, even if the Frenchman’s own coach Daniel Farke suggested “he’s still getting used to this central role”. Gladbach fear he might be getting used to a new club before long; Thuram is out of contract in the summer and will be hot property.