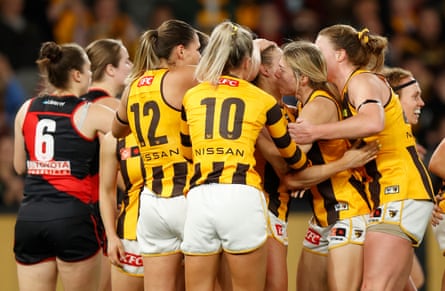 Melbourne win first flag: Premierships always bring heart-warming stories. After losing last season’s grand final earlier this year and sitting there or thereabouts since the league’s inception, the Dees finally reached the pinnacle on Sunday. Their drive and determination has been clearly visible in captain Daisy Pearce for a long time. At 34, with her playing legacy now secured, she may decide to focus on commentary and an upcoming coaching opportunity at Geelong.

What Melbourne’s flag meant to the other Dees who were also there from the beginning, including midfielders Karen Paxman and Lily Mithen, should not be underestimated either. Defender Libby Birch also became the first player to feature in two flags at different clubs.

Teams find their feet: At each round of expansion, there has been anxiety about whether it was too soon or whether the talent pool was too thin. Teams in the premiership window like Brisbane, Adelaide and Melbourne have largely weathered expansion raids as the “place to be”. But hugely one-sided games such the Adelaide v GWS clash in September, which the Crows won 15.7 (97) to 0.1 (1), have felt a little cruel.

With so much talent layered on through the draft and increasing pathways each year, teams that previously struggled were able to find another level this season. In season six, Geelong and Richmond had two and three wins respectively. This time around, in season seven, both played finals. Stars like Georgie Prespakis and Ellie McKenzie have matured to lead their young teams. Gold Coast were another success, despite being raided by expansion side Port Adelaide, and only just missed finals.

Draftees go from strength to strength: The positive impact of better development pathways to footy for girls continues – look no further than how this year’s draftees faired for evidence. Hannah Ewings of Port Adelaide won the Rising Star but also had the highest number of AFLW best and fairest votes for her side, polling seven votes. Essendon’s Paige Scott became an instant fan favourite with her tackling pressure, thumping kicks and attitude.

The timing of this season also meant that some players, like Rylie Wilcox of the Bulldogs and Hawthorn’s Jasmine Fleming, were still at school. It makes for an exciting future for the women’s game.

A season of firsts: It had been an agonising, for some a decades-long, wait for Essendon, Hawthorn, Port Adelaide and Sydney fans to support their AFLW teamand their first matches were emotional for all. Over 12,000 witnessed Essendon play Hawthorn at Marvel Stadium, with Hawks debutant Sophie Locke etching her name in history as the team’s first goalkicker. It was a fitting tribute to her mum who had recently passed away.

Full expansion to 18 teams this season also gave traditional men’s rivalries new meaning. The Dreamtime match between Essendon and Richmond honoured First Nations people and ended in a nail-biting win for the Tigers, while the first AFLW Showdown was watched by over 20,000 at Adelaide Oval.

Lack of foresight lets the league down again: A few decisions left fans scratching their heads, and wanting more commitment from the governing body. The scheduling of Richmond’s home semi-final at the low-capacity Swinburne Centre and the late scramble for a grand final location in Brisbane were counterproductive to the competition’s fight for growth.

Meanwhile, the lack of goal-line technology at the many grounds used by the AFLW continues to wreak havoc. In Sydney’s game against Essendon, a third-quarter behind by the Swans’ Molly Eastman was later discovered to have been a goal. They went on to lose by just four points. Setbacks like this must be extraordinarily frustrating for the hard-working players.

Injuries: In the opening round, Brisbane defender Lily Postlethwaite injured her right knee in her comeback from a reconstruction on her left knee. She is one of too many players left heartbroken by ACL injuries this season. There is plenty of research under way to understand why women seem so prone to this injury and the work’s conclusions cannot come soon enough.

Freak injuries during season seven were no less tough to watch: the Bulldogs’ Brit Gutknecht broke her tibia and fibula and received treatment on field while her parents watched on; her teammate Kirsten McLeod returned to footy after 570 days away from the game as she battled long-term concussion symptoms, only to break her fibula and suffer a syndesmosis injury.

The compromised fixture: A 10-round season meant that some teams had much softer fixtures than others. North Melbourne got the rough end of the stick, having played every team in the top eight. They ultimately dropped to eighth in the final round after looking set for a top-four finish. Their quality was ultimately affirmed by two finals wins and a competitive loss to Melbourne.

Every team playing each other once should be prioritised to ensure the competition’s integrity. The AFLW’s upcoming CBA negotiations now fall at the same time as the men’s, providing a prime bargaining opportunity for players to stand together on issues such as this.

Disappointment for some: This is sport, and there must be losers as well as winners. Teams like Fremantle and Carlton would be disappointed with their performance relative to potential this season. Sydney couldn’t seal a win in their inaugural season, despite coming close against Essendon and Hawthorn. The Giants had a couple of big losses.

For as long as players have to work full-time jobs away from footy, and are unlikely to move states just to play, the New South Wales teams will be disadvantaged by the league’s state-based draft and slower developing pathways. However, players such as top draft pick Montana Ham and inaugural club best and fairest winner Cynthia Hamilton give Sydney a lot to be excited about.