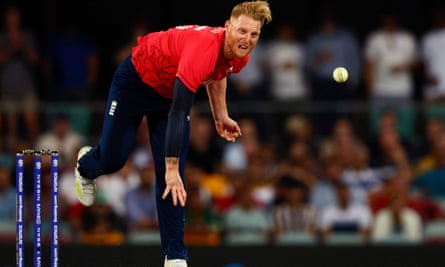 This was a very satisfying game of cricket, a mid-tournament group match in a rain-frazzled week that stayed alive for 39 of its 40 overs, played out in front of a semi-packed Gabba. In the broader sweep of things England’s 20-run defeat of New Zealand was another note in an excellent World Cup of deeper gears and genuine engagement.

The lesson of these contests, which have felt jarringly real after the thin gruel of the year-round franchise circuit, is that the product works; that all the cricket is good, red or white ball, when it actually means something.

Certainly, this is not the World Cup of a sport that needs to turn itself inside out seeking every last drop of TV revenue. Not that this is likely to stop it happening.

Victory keeps England’s tournament hopes alive. They can still lose to Sri Lanka in Sydney, but they can also improve from here. Batting first there was still a sense of something a little tangled, an order forced to dance (or float if you want to be nice) around the Ben Stokes-shaped hole at its centre.

Most significant of all, England looked more than ever like a team in the image of its new-ish captain. They won this game by bowling the way Jos Buttler bats: with clarity, cold-eyed execution and plans that always seemed to be two frames ahead. Win or lose from here, this was Josball in action.

Key to victory were England’s seamers, who significantly out-bowled their counterparts. Both teams fielded a left-armer, a right-arm swinger and a genuine quick. Trent Boult, Tim Southee and Lockie Ferguson took three for 128 from 12 overs. Mark Wood, Chris Woakes and Sam Curran took five for 84 off 11.

They were aided by fine, decisive captaincy from Buttler. The rotation was slick, the match-ups acute without being dogmatic. Mainly they just bowled well. Wood’s figures look unexceptional, but it was his final over, the 15th, that dead-headed New Zealand’s chase. Basically he just bowled really fast, back of a length, drawing swishes from New Zealand’s hitters when a little more in the way of batting was required.

Woakes piled into the breach. And in the end England won in a way that felt different to the Morgan-Bayliss age of speed-metal batting aggression, winning instead through clarity of bowling roles and the constant nudges of the keeper-captain.

It is notable that the batting looks less laser-cut these days. England’s total was based around an excellent opening partnership. But the Stokes conundrum still lurks at the heart of this thing. Here is a player England are picking on expected runs, on optics, celebrity pull and manly feelings of respect; but who is basically not very good at batting in T20 cricket.

There are two ways of looking at this from here. Stokes did nothing in Brisbane, thrashing his way to eight to make it 67 runs in his last 10 innings. But he’s too talented to do nothing for ever. Yes, numbers and data. But cricket lore, man-vibes, the ex-pro gut all say he’s destined to hit the winning six next week.

The other approach is to apply facts not feelings. “If it comes to the crunch you want a man like Ben Stokes walking out,” Paul Collingwood has suggested, but this is just incorrect on the facts, a kind of jobs-for-the-boys fantasy play. Stokes has never got past 47 for England in T20s. He averages 18. Plus, well, Carlos Brathwaite. Cricket hates comparisons with football, but it does invite them with its new-found tendency to fawn over star players.

Here the effect of picking Stokes as a top-order player was to mess in some small way with the other parts around him. England went 19 overs of a key game before they got to use Dawid Malan, their best middle-order batsman, because of a fear of having him at the crease with Stokes, both labelled (not so much for Malan) as slow-starting left-handers.

Moeen Ali moved to No 3 to take it to spinners, but also not to be like Stokes. Liam Livingstone was at four for much the same reason. Both swiped in a slightly forced way. Harry Brook hit a six and hurried off. Out came Stokes, who must bat whatever happens, a bit like having the coach’s son in the team. He whumped the ball at the fielders, then ran out Buttler.

England ended on 180, perhaps 10 runs short of where they might have been. This is to take the negatives, to demand batting perfection. But these games are often decided by very fine margins.

On the plus side Buttler was all familiar whip-crack power, and Alex Hales was more like Alex Hales, at his best when he simply stands there and unleashes the scythe. Hales got to fifty then ran past one from Mitchell Santner, who looks like he should be playing for the third XI, a break from his day job as a bookish local vet, but is also a highly effective cricketer.

Buttler’s batting and captaincy will surely define England’s fortunes from here. Dropping Stokes to seven for the rest of the tournament would be a decisive call. For now there is at least a sense of something new; if not a triumph of Josball, then at least a sense of what it might look like.