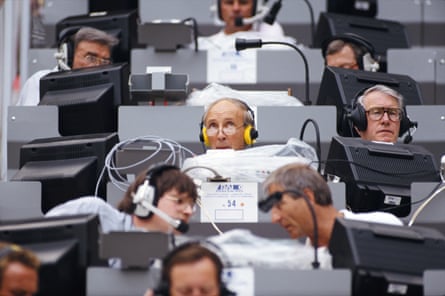 Somewhere in a reinforced concrete bunker in the northern hemisphere, Paul Dempsey is still talking. He was talking long before you turned the television on and you can be sure he’ll be talking long after you turn it off. He’s got a list of names in front of him, stats and facts, reserves of time and patience that will outlast any human, living or dead.

Here’s Lautaro Martínez, who has never scored a volley in October. Lays it off to Francesco Caputo, who owns four hats. That’s Jackson Borck on the Sampdoria bench, who joined in the summer from Fighting Spiders in the Maltese Premier Division, whose next game you can catch on BT Sport 8 on Thursday at 11am. Now here’s Denzel Dumfries, who has never tasted jam.

Yes: the commentators have taken over. And a very understated invasion it has been, too: a faceless army of interchangeable middle-aged men quietly sequestering our screens, demanding only the right to talk about the football, any football, for ever. I’m talking Adam Summerton, Daniel Mann, Mark Scott, Joe Speight. I’m talking Dan Parsons, Gary Taphouse, Tom Barraclough, Steve Bower. You wouldn’t recognise them in the street. You probably didn’t even notice I made two of them up. But they’ve spent longer talking to you than many of your close family.

At the same time, something strange seems to have happened to a noble profession that was once drenched in an irresistible sun-dappled glamour.

Motson, Davies, Moore (and there were never more than three): these were the gods of the gantry, braving the midday Mexican heat and the bone-rattling Boxing Day chill. We were their rapt congregation, hanging on every word.

It’s hard to recreate that wonder these days. Largely this is down to the sheer crushing volume of live football: not so much an event of national communion as an endless scroll of dead content, much of it delivered from a dark metal box somewhere in southern England in front of two blinking screens and a Pumpkin Café cappuccino slowly going cold in its non-compostable cup. No wonder the narrators of this simulacrum sound increasingly drawn and forlorn, like prisoners in a dystopian police state trying to earn enough credits for their freedom.

This is in no way to devalue the job of live broadcasting: a difficult and often thankless task that requires not just natural talent but – in the social media age – a depressingly thick skin. But it strikes me there is a whole unexplored aspect to this debate. The original football commentators emerged in an era when television was still a close cousin of radio, when the pictures were fuzzy and everyone needed a little help recognising which player was which. Does this still hold true in an age of 4K Ultra HD, names on shirts, augmented reality and overlay graphics?

The technology exists to identify players with far greater accuracy and speed than a human commentator ever could. In which case, what purpose does the human serve? If you were starting football from scratch, would you still have these guys chattering away in the background? If not, what’s the point of them now?

There is a sincere and a cynical answer to this question. Any decent commentator will argue that their job is not simply to narrate but to contextualise: to tell the story and explain why it matters. The problem is that this is not really how we interact with football any more. Most people these days watch the game while doing something else: travelling, cooking, entertaining friends, scrolling through social media. In the second-screen age the commentator serves a subtly different function.

There is a bit in The Tempest where Prospero is making a long, rambling speech to Miranda when he suddenly blurts out: “Dost thou attend me?” It’s addressed to Miranda, but really it’s addressed to the audience: “Hey, are you listening?” This is the commentator’s real job these days: to remind us when we need to run back from the kitchen.

Over time different styles of commentary have sprung up, all furiously jostling for a niche in the attention economy. Commentary as an extension of pub banter. Catchphrase commentary. Overwrought, emotion-soaked commentary specifically geared towards the viral clip market. “MILANESE! MAYHEM!” Peter Drury will shout after a dramatic late winner. “A SAN SIRO DRAMA TO END ALL DRAMAS!” And you think: all right Peter, it’s a 1-0 win in Europa League Group K. Let’s not go overboard.

There is a high degree of subjectivity here. Some of you clearly can’t get enough of the football men talking (and for all the progress made, this remains an unforgivably white and male profession). Some of you will take comfort in a familiar voice. Some of you prefer shouting, some wit and whimsy. Some of you will be devotees of the YouTube watchalong, where you log in to watch a man with two million followers swearing at a screen.

But for decades televised football has gone one way: more talking, more curation, more voices, more product. Somewhere in a splintered market, there may just be an audience out there for the very opposite: football without any commentary. Just a viewer, a screen and the seductive ambient noise of the game. A sparser broadcast, but one that feels all the more immersive as a result, as close to the live experience as it is possible to get.