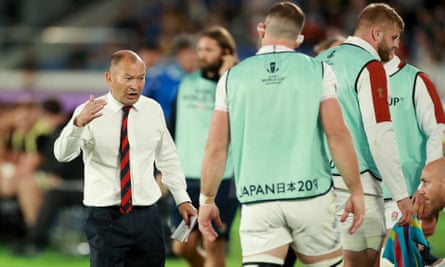 There have been a few good Eddie Jones stories going round the grounds lately. Joe Simpson told one the other day about the time Jones gave a steak to one of his assistant coaches as an apology for shouting at him. When the coach got home he found out it was a bag of sausages. “You’re not ready for steak yet,” Jones told him.

Here’s another, a little different to some of the others. In 2019, Jones read a Guardian article about an England fan who had travelled to watch the team play in Japan while he was sick with cancer. Jones asked for his number, rang him up and had a long chat with him about his illness, then sent him a Christmas present.

When Jones said last Saturday that he “doesn’t care what people think”, I don’t think for a minute he was talking down to the fans, whom he had made a point of thanking at length for their help when England drew against New Zealand the previous week, but the press, yes, and the players and coaches working as pundits.

Jones’s behaviour when England lose has become wearily familiar. He says it is all his fault, which is his way of drawing the blame from his players, and then, often as not, he picks a fight. Which is why, after seven years of all this, he doesn’t have too many friends left pulling for him when he needs them.

Read Jones’s autobiography and you can see he has been like this since he was a kid. He was the working-class son of a Japanese-Australian marriage and grew up in a time and place where he felt there was a “hostility that bordered on hatred towards Japan”. He realised early on that sport was his “way to make a mark”, but since he was smaller than most, and looked different too, he knew that he needed to try harder than everyone else.

He is the same way now. You can see it in his resentment of the idea that anyone else might know better, in his relentless work ethic, and in his belief that people need to be challenged to get ahead. Jones loves to make people uncomfortable. He thinks it is good for them.

It’s there, too, in his fondness for players who have a similar background to his own, “I like the guys that have come up the tougher way,” he’s said, “who have got to keep battling, have got to keep proving themselves”. And his scepticism about the private school system. It runs through his teams, which he shapes in his own image. The signature wins of his career were against the odds – Japan’s over South Africa in 2015, England’s grand slam in 2016, their semi-final against New Zealand three years later. He is a man who understands, by long and hard-won experience, how to play the underdog.

Which makes him an odd fit for England. If you asked fans around the world to sum up their image of English rugby, you would find “underdog” comes a long way down of the list of responses, but its antonyms might be right up there and with some reason, since they have more players than most countries, more fans and more money, too.

Jones even went through a stretch of insisting that his team were second-favourites for every other game they played, which ended with him being repeatedly criticised for setting low expectations. “England at home,” wrote Clive Woodward, “should never be considered underdogs.”

I’m not sure Jones has ever quite understood how to handle that aspect of his team’s character. He is certainly less adept at coaching a team that expects to win. This time last year, he was talking about the edge South Africa had over England in the World Cup final in 2019, “that extra little bit” of motivation Rassie Erasmus found when he spoke so well about what the game meant to their country. I asked if Jones knew what might do it for England. “I’d love to say yes but I’m not sure I do, and that’s what we’re trying to find. I don’t know whether it’s got to do with their history, or their society, or it might be other things, but we’re still searching for it.”

The irony is that England have been playing so badly lately, have lost so many games, that they have accidentally ended up going into the World Cup year as exactly that. Underdogs. Which may just suit Jones, if the Rugby Football Union lets him do it.

What would they gain from pulling the feet out from under him now, three-years into a four-year plan? It would leave them all-in on the long-shot possibility that a new coach could build a World Cup winning team in the nine months (and before you say it, Erasmus had double that when he took over South Africa). And maybe more important for them, they would be buying themselves a ready-made excuse when he does not.

Jones has made plenty of mistakes, in his selections, in the way he has treated some of his players and coaches, in his persistence with a style of attack that clearly isn’t working, and his neglect of everything else but the World Cup (which reminds us of what Steve Hansen once said about him “sometimes wanting something so much [that it] can get in the way of actually achieving it”).

Jones has turned the future into a question of faith, and the way his team have been playing lately has given people precious little reason to believe. But right now, nine months out from the World Cup, the best bet the RFU can make is to give him the chance to play his way out of the corner. It is, after all, something he’s been doing all his life.