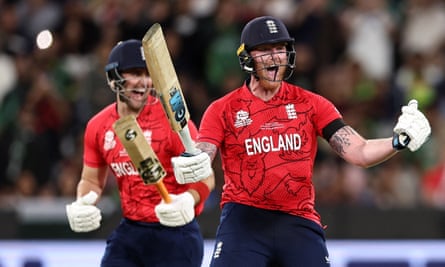 After days of dire forecasts, it was unexpected to even have a T20 World Cup final. Angry cartoon thunderstorms failed to deliver on a night that felt warm and humid enough to bring them on. India supporters had expected to see their team but their semi-final knockout didn’t have the expected hit on crowds, with more than 80,000 still in attendance at Melbourne’s giant arena. As Pakistan fans filed out, post-match presentations offered a manufactured euphoria of ascending Coldplay choruses while gold glitter covered the grass, shimmering like a fleeting nightclub dream. The real euphoria was among the England squad, whose podium appearance was one of the least expected things of all.

A month ago, England had a claim to be T20 World Cup favourites. This was not the domineering side that Eoin Morgan had led, with Jason Roy and Jonny Bairstow wreaking carnage on the regular. Patching had been required. But there was still destructive batting, varied bowling, and the Morgan legacy of aggression. Their preparation saw them go head to head with Pakistan during a pulsating seven-match series, then come to Australia for three matches to beat a second good side on its home turf.

Two weeks ago, that optimism had vanished. England struggled to a modest chase against Afghanistan, lost to Ireland, and accordingly looked lucky to dodge a potential knockout against Australia thanks to rain. The question marks and calculated risks in the XI looked like structural deficiencies, the long lead-up looked like a recipe for fatigue. Reaching the final at the Melbourne Cricket Ground was a distant hope.

As in any good action movie, the car comes to life at the last possible moment. So it was, with players who had been marginalised, sidelined, or discarded over their England careers all firing when there was no other option. Start at the top with Alex Hales, off national duty since 2019 owing to Morgan’s concern about deficiencies of character. Small returns from early games gave way to 52 against New Zealand, 47 against Sri Lanka, and 86 not out against India; 185 runs off 117 balls in a string of knockout matches.

Moving on to Sam Curran, for so long wanted around squads as a player deemed useful without ever being first choice. Was he wanted for late-order hitting, or occasional swing, or to have a player who runs in to bowl like a cartoon burglar carrying a sack? Through this World Cup he was bowling his full allotment, culminating with figures of three for 12 and awards for player of the final and of the tournament.

On to Moeen Ali, brought in and left out across formats, now playing an established part in the middle order. Needing a scoring lift, his three boundaries in the 17th over tilted the chase irretrievably England’s way. On to Chris Jordan, a specialist substitute fielder until Mark Wood was injured, once a resolute death bowler whose days of handling that responsibility were thought to be over. In this match, two overs suppressing Babar Azam and Shan Masood when on the charge, one to vitally dismiss Shadab Khan, and a 20th that denied any late mayonnaise.

And then there is Ben Stokes, purveyor of dramatic finishes. Not so good in 2016, when his bowling was launched four times into the Kolkata sky as Carlos Brathwaite snatched a title. That night now balanced out by this one, and an opposite batting performance. Stokes had been surplus to a team that could not carry two anchors, but Dawid Malan’s injury tilted the balance. Needing barely a run a ball after the Powerplay, the situation in this final suited his slow starting. He sputtered and wheezed to 24 from 34 balls, normally a criminal ratio in this form, but had time to take back control, finishing with three big hits, a positive strike rate, his first 50 in the format, and the winning runs.

Perhaps most important, though, was Adil Rashid. Since 2019, when the leg-spinner played his part in England’s one-day World Cup win, there has been speculation as to whether he should be moved on. Ageing is a fraught process for cricketers, especially one whose fielding has never been strong and whose batting contributions had faded. In six games from his arrival in Australia in October until an expensive outing in the group match against New Zealand, he had gone at nearly nine runs per over for one wicket in 114 balls.

From there, he used flight and turn and changed the course of the campaign. He haunted the Sri Lankans with a spell conceding 16 runs and dismissing key bat Pathum Nissanka. His one for 20 in the semi-final took out India’s most important striker, producing enough turn to beat the monstrously in-form Suryakumar Yadav. He curbed Babar just as Pakistan’s captain was starting to flourish, after dismissing the incredibly fast-scoring Mohammad Haris, finishing with two for 22.

The questions about these players were valid. Whether Hales could return to the top has been answered. The longevity of Jordan, Rashid, Moeen, and the suitability of the Stokes method, remain open. Curran’s nought for 42 in the semi could be as indicative as his three for 12. But for the few games when the course to the title was decided, those players transcended concerns and delivered what was required. As the Bureau of Meteorology knows, predictions do not always come to pass.