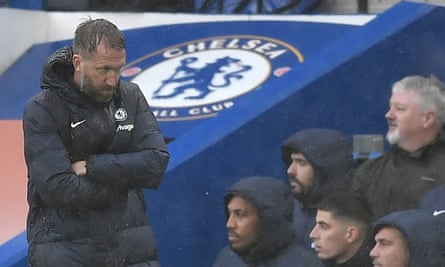 Thiago Silva paused with the ball on the halfway line. Alongside him, his teammates were pointing and shouting at him to do something with it. Up in the stands, the various strands of encouraging advice being proffered by Chelsea fans had essentially congealed into a single unintelligible noise – something like “faacckkinggettrrrrid”, if we were going to try and transcribe it. And so it was that in the final minute of injury time, with Chelsea rousing themselves in search of a late equaliser, their chosen tactic was to pump a high ball up to the 5ft 7in Raheem Sterling.

As it happened, Sterling was offside, and soon after that Michael Oliver brought proceedings to a merciful close. And strictly speaking Chelsea lost this game not in the fumblings of stoppage time but in the inept and inchoate hour and a half that preceded it. Still, as an emblem of their deficiencies and inefficiencies here, it was as good as any. The good news is that Chelsea look like a team with plenty of ideas. The problem is that nobody seems to be sharing their ideas with anyone else.

The result is akin to one of those Christmas parlour games where one person starts a drawing, folds the paper over and then passes it to someone else, who adds a bit and passes it on, and at the end everyone laughs and has a sherry. A spirited attack would develop, various wet men would run in various directions, and once the move unfolded everyone would look up to discover that Chelsea had somehow ended up with four left-wingers, nobody in the centre, Raheem Sterling on his backside and the ball hurtling back towards their own goal at an alarming speed.

Throw in the menacing undercurrent of a London derby, the driving rain and a noon kick-off, and perhaps it is no surprise that Chelsea left the field looking not just drenched but utterly perplexed. Even the singing betrayed a lack of cohesion: while the Matthew Harding Stand began the game with their customary “champions of Europe, you’ll never sing that”, the East Stand plumped inexplicably for the variant: “where’s your European Cup?” A mess.

For now Graham Potter is still the solution rather than the problem here: a systems coach brought in to manage a squad of impulse purchases, the long-term strategist thrown into the biggest job of his life mid-season.

But if there has been a weakness in these early weeks it has been the failure to project a sense of control, the sense that amid the rolling chaos there is at least a clear and identifiable direction of travel.

Formations shift from game to game, sometimes from half to half. The press is furious at times and non-existent at others. Sterling is a wing-back one game, a winger the next and a sort of roaming nine-and-three-quarters the one after that. Everyone knows that he is learning on the job. But there are times when you wish he would make it a little less obvious.

But then Potter is fighting deep-seated, systemic issues here. Perhaps this is what happens when you build the entire culture of a football club around the idea of permanent disruption. Where success is merely a case of throwing the best guys together and hoping it all clicks for a season (never two). Just consider how many different roles and tactics – say – Ruben Loftus-Cheek has had to learn over the years under his seven different managers. Time and again we saw Sterling or Kai Havertz or Armando Broja getting the ball and simply stopping to have a bit of a think. Hang on, I know this one. It was in the playbook … Mason comes short and Auba makes the run into the left channel and … oh cripes, there’s Granit Xhaka.

In a way, this is a good sign. It shows that there is at least an element of learning and rewiring taking place here, that the parts are slowly in the process of being moulded into a functional whole. And there were fleeting glimpses of how it might eventually all work: the quick kicks from Edouard Mendy to Sterling, the little darts into the channel from Havertz.

But right now Arsenal are simply too big and complex a problem for this Chelsea to solve. And until Potter’s ideas begin to take root they will continue to look vulnerable: too easy to pass through, too easy to hassle off the ball. Manchester United, Brighton, Dinamo Zagreb and now Arsenal have all discovered that in recent weeks.

The interesting part will be to see whether the right lessons are taken here. Just think how long it took Mikel Arteta’s Arsenal to look remotely competent, let alone capable of challenging Manchester City for the title.

This was Mikel Arteta’s 150th game in all competitions; the last guy to survive that long at Chelsea was 14 managers ago. Potter knows that what he needs above all is a little time, a little patience, a little faith, a little breathing space. He must surely also know that he will get none of these.