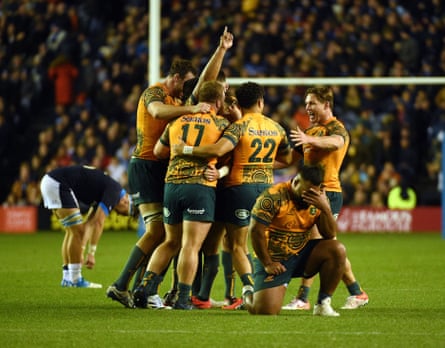 When Australia play France there are always fireworks. The tempo was set in the very first Test in 1928 when French prop Jean Morere headbutted Jim Tancred and was left-hooked by NSW flanker Bluey Greatorex. After their next encounter in 1948, “one hundred infuriated spectators rushed on the field, hit the referee and threw mud at him”. In 1967, captain John Thornett told the referee his side would walk-off “if you don’t stop the Frenchmen kicking us”. In 1997, No 8 Troy Coker was asked why he punched Fabian Pelous. “What are you supposed to do when a guy has his fingers buried up to the second knuckle in your eye socket?”

Last Sunday, for once, Australia won a game they should have lost, when Scotland flyhalf Blair Kinghorn sliced a very-gettable penalty after the siren at Murrayfield. It backhanded Dave Rennie’s men a gritty 16-15 victory, got their European tour off to a vital positive start, snapped a three-Test losing streak and lifted them from ninth-ranked team in the world to sixth (behind England, ahead of Wales). Best of all, it gifted the touring squad a much-needed confidence boost.

Although the usual silly penalties, muddled attack and mental lapses were on show, there was plenty to like for Wallabies fans. Recalled Goliath Nick Frost put a stranglehold on his second-row spot with a best-on-field showing. Unloved at the start of 2022, the agile 23-year-old had signed with Robbie Deans’ Panasonic Wild Knights but was talked back into gold by Brumbies coach Dan McKellar. Frost rewarded the faith at Murrayfield, dominating the lineout as he won 10 and stole two while also making 18 tackles and plenty of charges.

This week Frost will pack down alongside another giant, 203cm 140kg Will Skelton, a star for French Top 14 side La Rochelle but, by his own admittance, an underperformer in his 21 Tests so far. Skelton, 30, joined the squad this week at their training base in Saint Etienne with a point to prove (he was part of three losing Wallabies teams on 2021’s Spring tour). His muscle at the ruck and maul, and six years in Paris, can combat a massive French pack.

It was timely that Taniel Tupou had his best game in a long time against the Scots. Tupou has had the dollar goggles on for much of the season and lost him the tight-head starting spot to Allan Alaalatoa. But with the Brumbies skipper scratched with concussion symptoms, Tupou is a lock to start against the French. Can he find the old crunch? With twin titans Frost and Skelton behind him, skipper James Slipper alongside, and a dynamic rust-free backrow of Michael Hooper, Rob Valetini and Pete Samu, it’s now or never for the Tongan Thor.

The French are captained by Antoine Dupont, 25, a brilliant scrumhalf, powerful defender and World Rugby’s 2021 player of the year. His talented side is fizzing with established club combinations, won the grand slam for the first time in a decade this year and on a 10-Test winning streak, a national record. France are the hottest team in northern hemisphere rugby and the favourites to win the 2023 World Cup on home soil. But they are beatable if Australia can shake a gorilla off their back by winning two-straight for the first time this year.

If the Australian heavies match it with the French marauders up front, it’ll be up to the backs to convert that into points. It will take two halves to match Dupont but the Tate McDermott-Nic White switcheroo worked last week. McDermott’s sniping carved through the Scottish defenders early, while White’s bullet passes and cool scheming kept the Wallabies close enough to capitalise when the home side fluffed the killer blow. If Bernard Foley plays flat, to unleash linebreakers Lalakai Foketi and Hunter Paisami, and Rennie picks dynamos Jordan Petaia and Mark Nawaqanitawase as his backburners there is the hope of an upset.

Win or lose, Les Bleus offer a greater value to the Wallabies – a benchmark on where they must get to by next September. Sunday’s Test follows a thrilling 2-1 Australian series in 2021 and lights the fuse on a future duel, both teams’ last before the World Cup in Paris in August. This scheduling coup is the fruit of a deal hatched over lunch in Saint-Germain-des-Prés last November between RA chairman Hamish McLennan, two-time World Cup winner Phil Kearns and French rugby boss/World Rugby vice-chair Bernard Laporte.

It gives the Wallabies a fantastic runway to success at the tournament that matters most. There may have been blood spilt between these nations in the past, but the French connection with Australian rugby is proof that it’s a currency thicker than water.