It’s Creator Week at Meta, and along with various showcase events and panels, Meta has also announced some new features for creators, including expanded monetization opportunities, and new tools to facilitate creation and selling of NFTs.

First off, Instagram’s making fan subscriptions available to all eligible creators in the US, which will enable a lot more people to monetize their Instagram audience via direct, ongoing support from their communities. 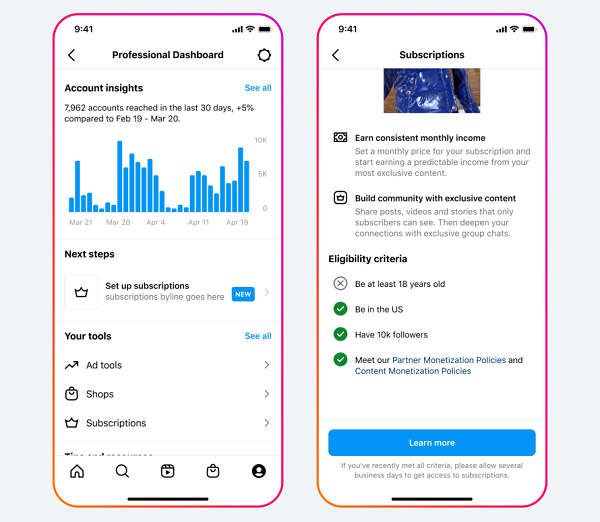 Instagram first launched fan subscriptions with selected creators back in January, as part of its expanding suite of creator monetization tools, which are designed to keep top talent aligned to its app.

With subscriptions, creators (with over 10k followers) are able to charge a monthly fee – between $0.99 and $99.99 – which then gives paying members access to subscribers-only live-streams, subscribers-only posts and Stories and badges in comment streams to help creators identify their supporters.

Instagram takes no cut from subscriber revenue at this stage, though any fees paid are subject to Google and Apple’s 30% in fees for in-app purchases. But outside of that, any money raised is yours, which provides another avenue for creators to make money from their IG content.

Meta’s also launching new gifts in Instagram Reels, which will enable viewers to send virtual Gifts to Reels creators, which then allocate the cost of that gift as a donation. 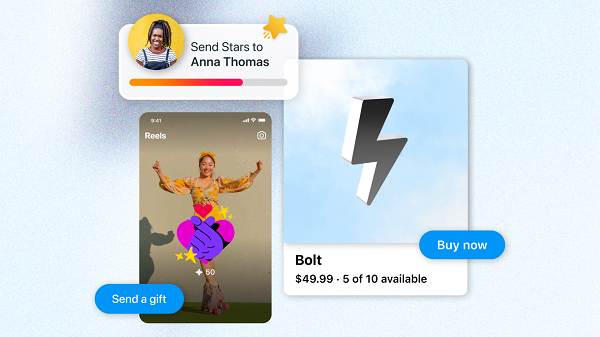 So it’s like Facebook Stars, but in a different form, with these more illustrative, animated gift types potentially drawing more attention and engagement.

Meta’s testing gifts on Reels in the US to begin with, before considering broader expansion.

Speaking of Stars, over on Facebook, more creators will now also be able to access its fan donation feature, which enables your supporters to allocate funds to you during videos and live-streams. 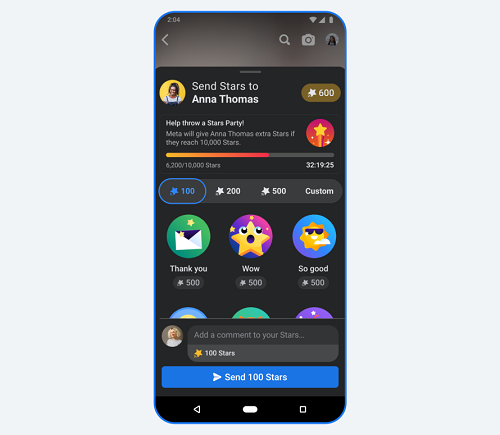 Meta’s also testing automatic Stars onboarding for creators, meaning the ability to receive Stars will automatically appear on their content, while it’s also making Stars available on photo and text posts, in addition to videos, live-streams and Reels (Facebook added Stars for Reels back in August).

“Stars Party is a celebratory moment that happens when a spike of Stars are sent from your fans on live or reels. When the spike occurs, an overlay with a countdown will appear on the screen with a progress toward a goal, encouraging fans to send Stars and meet the Stars goal.”

Lastly, Meta’s looking to lean further into NFTs and digital art, via a new process which will enable users to both create and sell NFTs within Instagram. 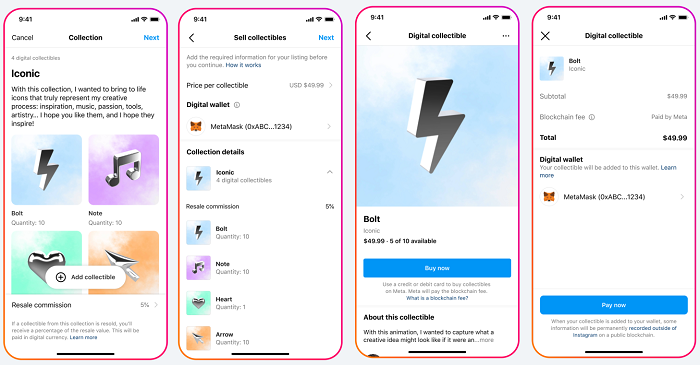 Meta says that creators will have ‘an end-to-end toolkit’ to facilitate NFT trading, with fans and collectors able to purchase digital collectibles directly within Instagram.

In addition, Meta’s also testing video digital collectibles on Instagram, and adding support for the Solana blockchain and Phantom wallet, in addition to the blockchains and wallets that it already supports.

NFTs will also now be enhanced with additional metadata from OpenSea to provide further context.

I’m still not sure that NFTs are going to be the transformative vehicle for artists that some had initially projected at the start of the boom period last year, but there is a clear niche interest in these artworks as collectible pieces, and as such, it makes sense for Instagram to lean into this, and facilitate engagement for the NFT community.

At the same time, Meta’s also eyeing a bigger user case for the underlying NFT process, in trading virtual items and digital goods that could theoretically be used and displayed within the metaverse.

If the metaverse does become a thing, as Meta anticipates, then buying and selling digital items will become a much bigger deal too, and with that in mind, integrating NFT processes, and engagement around digital goods, could be another step towards the next stage of online interaction.

These are some interesting additions, which contribute to Meta’s broader strategy to build better monetization opportunities for creators, in order to keep them posting, and building in their apps.

Meta also knows that it needs creators to lead its metaverse shift. The metaverse, as Meta envisions, will provide all-new opportunities for all types of creators to build entirely new experiences – and it’s those new, unique activations that will entice more people to buy into VR, and follow these creators through to the next stage.

That’s why Meta’s making creators a focus, and why enhanced monetization is key to its longer-term push.