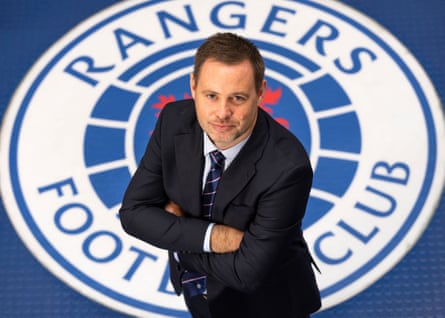 Mick Beale will claim the lure of Rangers was simply too strong. An emotional bond created during time spent at the club as assistant to Steven Gerrard meant he was destined to return. Blah blah. He could reasonably point towards a wider culture in football. Beale is not the first and will not be the last to have weighty sentiment almost immediately contradicted by actions. It is just that, in this case, it is bordering on the preposterous.

“It was a real privilege to be asked to go to speak to them but I didn’t think it was the right moment because I entered into an agreement here,” said Beale when Wolves tried to coax him from Queens Park Rangers. “Integrity is a real big thing for me, and loyalty. You don’t give it to receive it back but I think if they’re the values you live by then at times when you’re put in a position then you have to be strong by them. I’ve been all in here and I’ve asked others to be all in so I can’t be the first to run away from the ship.” This was in late October. Late October 2022. He will begin December as the new manager of Rangers. A switch from QPR to one of British football’s most esteemed clubs is hardly shocking but the self-aggrandising fuss Beale created when knocking back Wolves means onlookers are entitled to snort with laughter.

At Ibrox, where the season has been dominated by domestic shortcomings and Champions League embarrassment, they will not care if Beale has affronted anybody in west London. It will also be brushed aside that Beale headed north to take in Rangers’ victory over Aberdeen – posing with punters in pubs before taking his place in the VIP seats – at a time when Giovanni van Bronckhorst was clearly under pressure. The duly sacked Van Bronckhorst is known to have been upset by Beale’s prominent appearance and no wonder. If Beale, no stranger to self-promotion and having spent three years working in this frenzied domain, did not understand his visit to Glasgow would turn heads, he is far less streetwise than he would ever portray himself. Had he known precisely what he was doing? Hmm. Van Bronckhorst presided over only another four Rangers games, with Beale the automatic candidate to replace him. Good Ship QPR has been deserted.

Those who have worked under Beale describe an outstanding, single-minded coach. A career path which includes stops at Chelsea, Liverpool and São Paulo is to be admired. Yet for Rangers, this has the distinct look of another cosy appointment. Van Bronckhorst was a popular former player who was, conveniently, out of work. Beale delivers the comfort blanket of having been alongside Gerrard for Rangers’ iconic 55th title in 2021. This proved an all-too-rare moment of recent domestic glory for a club with by far the second-biggest budget in Scotland. Rangers have typically wilted, the only difference in this campaign being that the capitulation has arrived early.

There is no sense Beale was demanding Gerrard stay put at Rangers when Aston Villa came calling last year. Indeed, informed opinion suggested the management team were keen to free themselves from Ibrox. Gerrard claimed he had “completed” his “remit”. It is curious, then, that within such a short period of time Beale thinks it wise to work for the club again, not least when all pressure falls on his shoulders.

The coming days will see misty-eyed opinion over what Gerrard and Beale produced. That key championship, yes, and the regaining of status in Europe but an underwhelming return of one domestic trophy out of nine. Rangers and their acolytes never tire of telling the rest of us how much winning matters. Supporters regarded Gerrard’s football as predictable before and after the season where Celtic were comfortably swept aside. His departure felt mutually useful.

What Rangers need is a manager who can ruthlessly rebuild a fragile squad. Given Beale was in charge of QPR – his first main role – for little over 20 games, nobody truly knows whether that is within his capabilities. If it is not, Celtic’s run as Scotland’s dominant force for a decade will only be extended.

A glance through Rangers’ personnel dictates what must be done. Allan McGregor, Steven Davis and Scott Arfield are approaching the end of their careers. Glen Kamara will surely move abroad in January if a suitable offer is made. Alfredo Morelos and Ryan Kent, once key assets, appear to be winding down contracts. Borna Barisic’s defensive weakness – something of a problem for a full-back – is the reason hype around him was always strange. Malik Tillman and James Sands have done little to suggest they are worth the reasonable fees required to turn loans into permanent moves. Filip Helander and Kemar Roofe have appearance records which make Lord Lucan look omnipresent. Perhaps it is unfair to focus on the 18-year-old Leon King, promoted to the first team due to injuries, but he has done nothing to suggest he will be a long-term option at centre-back. Which is a pity; Rangers have done precious little else to adequately promote their own talent. James Tavernier is on such a lucrative contract that it may be impossible to shift him but Rangers should move on from a captain who has been involved in recurring domestic failure.

The positive for Beale and Rangers is that this muddle creates opportunity, should the 42-year-old be willing or able to grasp it. Rangers need root-and-branch change, such is the systematic failure of their football department. A run to last season’s Europa League final at least implied the team have talent but at home, where it counts, they are feeble.

Celtic invited risk when plucking Ange Postecoglou from Yokohama Marinos but he was an experienced manager who had sampled success at domestic and international level. Beale’s body of work includes five matches without a win at QPR; a wholly relevant statistic given he was only hired in June.

Beale is due credit for breaking the old football adage and “going back”. Presumably he thinks he can surpass what Gerrard achieved. What Beale and Rangers have in common is a tendency to talk the talk; together they have to walk the walk or this will be a mutually harmful reacquaintance.