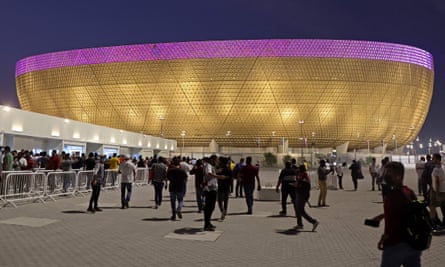 Roll up. Humans for sale. We will buy your labour. We will buy your joy too. We will buy your parping horn, your triumphalist songs. We will, let us make this clear, buy your feelings. So dance for us. Show your passion for the project (or lose its associated privileges). Because make no mistake: those tender feelings, the urge to feel and express pleasure, to interact with the spectacle, are now property of the state of Qatar.

There is something genuinely jaw-dropping about the story that 40 England fans – including members of the England band – and 40 Wales fans are being paid by Qatar to attend this month’s Fifa World Cup; a sense, common in the last few years, of reality starting to fray at the edges.

According to a Times report, and a similar story in the Netherlands this week, the England and Wales fans, along with supporters from 30 other nations, have signed a code of conduct that requires them to deliver positive messages about being in Qatar, to sing songs as directed, and, perhaps most unsettlingly, to respond to social media posts critical of Qatar’s World Cup.

In return the England band and their fellow Fan Leaders will receive flights, tickets, accommodation and £60-a-day spending money. “You will be expected to stand up, sing the song/chant, wave your flags,” Qatar’s guidance states, adding in red letters: “Be ready in your shirt, flags and scarves to cheer and shout.” Just to be clear, that’s shout. Not weep, or scream, or collapse into a slough of melancholy.

There is a Great Depression-era novel called They Shoot Horses, Don’t They?, set around a dance marathon competition on a pier in Santa Monica. In the book a group of young penniless people are paid to dance non-stop in public in return for food and a cash prize for the last couple left standing. Meanwhile paying customers can spectate on the dancers’ agony and fatigue, their forced gaiety, their murderous existential crises while circling the floor.

It is to be hoped a similar fate does not await the England band, out there trundling through their circular set-list, hands blistered and bloody as they creak out another rendition of the Great Escape, dreaming of vaulting their own barbed wire fences, trumpet nozzles slowly filling with tears and sweat and snot as the cameras pan back for one more cramp-ridden wave. Behold our migrant happiness workers, here to decorate the imperial show with their joy.

And really, you do wonder how this will play out in practice. Will Qatar’s image massagers suggest an updated version of the usual playlist? No Surrender To The Global Zionist Hegemony, perhaps. A pre-match chorus of Ten British-Made RAF Joint-Squadron Typhoon Bombers. Please Don’t Take Me Home, Because You’ve Confiscated My Passport. Plus of course the classic Southgate You’re The One, You Still Turn Me On (But Not, Repeat Not, In A Gay Way).

It is also tempting to wonder precisely how enthusiastic the faces of the contracted England fans need to look to remain within agreed parameters. How un-jubilant can you get, before your travel pass stops beeping on the metro?

Plus of course, there is the obvious point that England’s fan leaders have sold themselves for a disappointingly small amount of money. David Beckham got £15m for his soul, although the Beckham soul does come with 75 million Instagram followers, a range of country-squire hats and the weary disappointment of anyone who thought it was cool when he went on the cover of Attitude magazine.

Mainly we should also laugh at Qatar, because laughter is the opposite of the designed response, and may disincentivise the future purchasing of human feelings. And also because this whole process shows such a profound misunderstanding of how the PR is likely to work here in practice.

Or does it? Step back a little and it is hard to avoid an echo of a wider and more disturbing process. The fact is, the band and their contracted co-fans should not be the ultimate target of our ridicule. To be fair to the Fan Leaders this may just have seemed like a good idea at the time. There’s a cost of living crisis going on. Any kind of casual employment is welcome. Perhaps it was unclear how this would look and sound outside of their own echo chamber.

In the end they are basically doing what everyone else is doing around this World Cup and the version of the world it represents, a place where the very rich and powerful are free to explore their mastery and control of the poor and the plentiful.

So at the micro level we have the likes of Beckham, paid vast amounts of money to look fascinated in a faux spice market, all the while leasing out his public profile to the highest bidder; who isn’t, it turns out, the marginalised groups he has previously advocated.

Then at the far end we have the UK parliament, which has spent the last year parading on Qatar’s behalf in its vulcanised rubber thong like never before. Forget the fans. This is where our scorn should be focused.

Last week the Observer revealed the Qatari government had made gifts to members of parliament worth £251,208 in the 12 months to October 2022, including stays at luxury hotels with “vast swimming pools”, business class travel on Qatar Airways and a private dinner with Qatari World Cup officials. By pure coincidence some of those MPs would later praise Qatar or advocate its interests in the house of commons. “There is no suggestion that any MP broke rules” the Observer notes. OK then. So what does this tell us, exactly, about the rules?

And in the end this clumsy piece of World Cup stage management is probably doing us a favour. The Times story called the paid England fans “spies”. They’re not really. They’re cheerleaders. But they are also giving us information.

The paid fans are telling us in the boldest possible terms about the violently transactional forces at play around this World Cup. Big Sport is telling us that in the end everyone is for sale here, that humans and their feelings, their 8 billion-strong collective mass, are units of commerce out there.

It is the sharpest point of the thing we call “sportswashing”, humans literally being paid to dance and smile for the cameras in a stadium haunted by the ghosts of migrant workers. This same process applies too in the paid media, where for many outlets dissent has a financial penalty in clicks and subscribers. It’s there too, just down from the band, in the tribe-like ultra-loyalty of some football supporters, backing their club-colours despotic regime, whichever one it might happen be.

The ownership class will weaponise these emotions, from use as a soft power tool to wringing the last drop of cash from those unbreakable loyalties. And while the band deserve our ridicule, we are, to some degree, all marching to that same baleful tune.