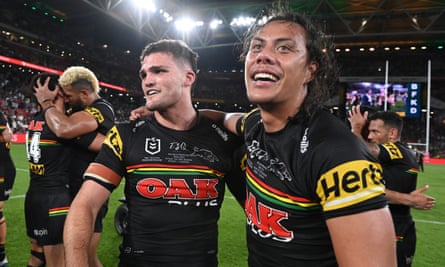 When Australia and Samoa walk onto the Old Trafford pitch this weekend with both the Paul Barrière Trophy and rugby league greatness on the line, there is unlikely to be a prouder cadre than the Penrith Panthers front office.

After claiming back-to-back NRL premierships and sending a record 19 players to the World Cup, a magnificent year for the Panthers will be capped when eight of their players likely square off in the decider. Among those eight will be a remarkable five members of the Penrith backline that defeated Parramatta in the NRL grand final – not inclusive of Clive Churchill medal winner Dylan Edwards.

Having eight players from a single club in a World Cup final is extraordinary. Only the great 1992 Wigan team has had as many in the last 40 years and all eight of those played for a losing Great Britain side. The current record for the most players from a club with at least one player on each team in the final was jointly held by Melbourne Storm, who had four Australian players and two New Zealanders in the 2008 final, and Balmain in 1988, who had five donning green and gold and one wearing black and white. No team in the professional era has had at least three players on each side in a World Cup final but that is likely to change when the weekend’s teams are announced.

When State of Origin came into existence, it was billed as state against state, mate against mate. This World Cup final very much marches to a similar beat with the close-knit Panthers team who came through the Penrith junior system together set to go up against each other in the most important game in international rugby league.

The Australian team will have Nathan Cleary at halfback, along with Isaah Yeo and Liam Martin starting in the backrow. Samoa will have backs Jarome Luai, Stephen Crichton, Brian To’o and Taylan May, as well as impact bench forward Spencer Leniu.

The most compelling of these individual clashes shapes as that between the Panthers’ halves pairing Cleary and Luai. The two have been the centrepieces of the last two premiership runs and have won and lost Origin series together for New South Wales. They are now in the rare position of facing off not only without their usual on-pitch partner, but against them.

It is not only a battle between two teammates and two great friends, but two players who are very much a contrast in style. Cleary, the robotic perfectionist, a product of a life in rugby league, textbook to a T. Luai, mouthy and energetic, a jackrabbit with a killer instinct, a genuine livewire. They are just the second club halves pairing after Kieran Foran and Daly Cherry-Evans in 2013 to meet in a World Cup final.

Cleary has received more acclaim over the course of pair’s careers but there is little doubt Luai has enjoyed a better World Cup. Luai has won player of the match honours in three of Samoa’s four wins. He leads the tournament in try assists and ranks fourth for offloads. Cleary, meanwhile, has been locked in a battle with Cherry-Evans for the starting halfback spot and has struggled to get any synchronicity with what has been a clunky backline in nearly every showing.

Luai, as expected, will not shy away from playing against Cleary, stating “there’s no friends on the field” as the two prepare to meet for the first time since facing each other as St Mary’s and Brothers players in the local Penrith junior competition.

Over the last decade, Penrith have created as fine an example of building from within as any club could hope for. Two premierships and eight players in a World Cup final are testament to both the plan and the execution of it. Their contribution to the international game and the rise of rugby league in Samoa can and should be part of the adulation heaped on the club.

Samoa is, to quote their coach Matt Parish, “a dot in the Pacific”, a country that ranks 189th in terms of population and whose preferred code of rugby is not the 13-man game. The country should not, in theory, be contesting a Rugby League World Cup final. Among the diaspora though, rugby league is incredibly popular – as evidenced in the rise of Pasifika participation at all levels of the game in Australia and New Zealand.

What no club prior to Penrith has sought to do, though, is fully embrace the Pasifika way, often trying to force square pegs into round holes in what have typically been very rigid programs within NRL teams. Penrith, by contrast, has fully invested in ensuring players of Pasifika descent can play a style and with an attitude they not only feel comfortable with but embrace.

The flow on has been the development of a cultural rugby league identity for Samoa as well as a pipeline of quality players coming from the most successful team in the NRL who want to transfer that success to the international stage and the country of their forebears.

The World Cup final will see mate playing against mate. But unlike State of Origin where clubs watch on in fear, Penrith powerbrokers should be able to sit back and look at just how much they have done for the game and how wide their decisions have reached.