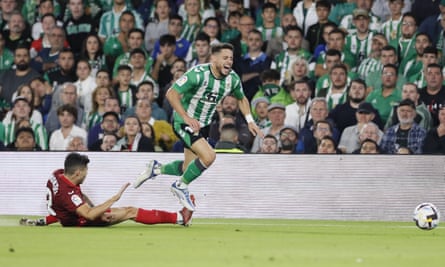 “Well, this is a derby,” Real Betis’s Edgar González was saying, but it was hard not to be drawn to the pitch behind him where opponent Nemanja Gudelj was pacing about shaking his head. At the final whistle, the Sevilla defender had covered his face with his hands and just stood doubled over, elbows on knees. Ivan Rakitic approached and they went through it once more, although it was a wonder they could hear anything. Next was Jesús Navas, the pair picking over the moment a vital victory slipped away. Now, waiting near the touchline for his turn to talk, they were going to ask Gudelj to relive it all over again on camera. He bit his lip, smiled and said: “I’m a bit angry with myself. I should have hit it better.”

Better?! The 138th Seville derby had finished 1-1 and Gudelj, son of a footballer and a basketball player, brother of a footballer and a tennis player, had scored the equaliser that earned Sevilla a precious point which pulled them out of the relegation zone. He had done so with an outrageous shot from somewhere over the other side of the Triana Bridge. “Buenisimo,” said the man he beat. It was only his second goal for Sevilla – his first had been an equally absurd effort from a similar place that secured victory in Mallorca three weeks earlier – and it could not have been hit better, the scoreboard behind the net flashing up golazos with impeccable and accidental timing as it tore 32 yards through the air.

Gudelj, though, was not really focused on that any more, but on what had come next. The clock had shown 80.58 when the ball raced past Claudio Bravo and into the net. It had shown 89.11 when he had controlled it on his chest and sent a ludicrous 20-yard volley crashing against the bar, the TV director deciding to turn away and focus on something else as it looped straight up into the sky and almost dropped down over the line. And it had shown 94.52 (of 95.04) when he had hit a first-time effort, bending and flying towards the top of the net from just beyond the penalty spot, only for Bravo to throw up a hand for a superb save.

In less than a quarter of an hour Gudelj could have scored three times as many as in his previous 127 games for the club put together. He could have scored the most ridiculously brilliant hat-trick ever – now there’s a debate for you: Rivaldo, surely? – from a combined distance not far off 90 yards. In a derby. Maybe the most passionate on earth. As a centre-back. A derby that his team desperately needed to win, too. But the closer he got to the goal, the further his shot got from being one and now he was kicking himself. “I needed to hit more to one side, I made it a bit too easy for Bravo,” he said, which was harsh on both of them.

Defeat probably would have been, too. “It would have been a pity to have conceded then,” Bravo said. This was one of those derbies where no one was satisfied, but actually they sort of all were, exhausted and, like the fan whose traffic light tower gave way on him, barely able to walk any more but basically unscathed. A game, Joan Jordán said, “where so much happened”: “A mad, mad, mad derby” as the headline in Diario de Sevilla had it. One that started with the first foul after 13 seconds and the second after 49, retaliation in early, and ran well beyond 100 minutes, that will keep running all week and beyond. A game marked by four red cards, 10 yellow cards, and a blue tracksuit, Jorge Sampaoli bouncing about on the touchline chewing anxiously on the draw strings of his hoodie. And ultimately decided by one stupid goal and one sensational one. That and a guy in the VAR room back in Las Rozas, 536km away.

Well, him and the anxiety that Manuel Pellegrini had warned them about. “They can’t let themselves get carried away by that,” Betis’s coach had said before, but they did; “The hatchet is never buried in a derby,” he said after. Unless it’s in someone’s leg.

Betis’s fans had hoped to slip in the knife, anyway. They had not had a lead like this over Sevilla for two decades but things were shifting. Holders of the Copa del Rey, having knocked out Sevilla en route in a game that had initially been abandoned after a flag pole hit Jordán – something Betis’s fans reminded them of with a pre-match banner covering an entire end and depicting Jordán, the stick, and Pinocchio – Betis were in a Champions League place at the start of the evening, third within reach. Sevilla, by contrast, were clinging on to the league itself, down in the bottom three. Julen Lopetegui had been sacked, but things had not improved: Sevilla had won once under Sampaoli and just didn’t look very good, like a relegation battle might actually be a reality. No one would have enjoyed that more than their neighbours.

Soon, things looked even worse for Sevilla. Navas was 49 seconds into a record 22nd derby in primera when he sent the ball flying past the goalkeeper’s hand, off the post and into the net. It was his own net and it was that kind of game. He had come on as a first-half sub after Gonzalo Montiel was handed a red card for a wild, flying tackle, studs connecting with Álex Moreno’s knee. At first the referee, Sánchez Martínez, had only given a yellow, but the replays saw that upgraded, Montiel losing his mind and having to be dragged off the pitch by teammates. Betis, who had already had chances for Aitor Ruibal, Moreno and Nabil Fekir, were a goal and a man up.

It didn’t last, the scene repeated twice more. That was 38 minutes in. On 45, Fekir got a yellow that was turned into a red for an arm in the face of Papu Gómez – who, despite being an opponent, seemed to suggest afterwards that he felt the card was excessive punishment, claiming that the game “is contact and it’s losing its essence”. Then Borja Iglesias put his studs down Jordán’s ankle and was handed a yellow card that was also turned into a red on 48 minutes (which was weird, because he had his best chance with a one-on-one on 55 – explained by the 10 minutes of time added at the end of the first half before the clock started again on 45 in the second.) A fourth red was later handed to Betis’s goalkeeper coach Toni Doblas.

From a goal and a man up, Betis now faced 40 minutes or so a man down, just eight outfield players on the pitch, all plans turned on their head. All post-match judgements too. There could be no analysis without the cards, each side clinging to the bit that suited them and the discourse of disappointment, a little more happy than they would admit. “We deserved to win,” Sampaoli said. “We feel like it’s two points lost,” Pellegrini replied.

“We spent the whole of the second half in their goal,” Sampaoli insisted. But González was immense – he made four vital interceptions – Jordán complained that his Sevilla team had attacked “badly” and Pellegrini said Betis mostly kept them at a distance. Just not quite enough distance to stop Gudelj smashing in a sensational equaliser. “I practise them from there in training and when I hit it, I felt it was going in,” he said. “We all went mad of course, celebrating like a family.”

A frantic finish was set up but, when he got another chance with the very last attack only to see the ball pushed away, Gudelj slipped to his knees, unable to forget about it. For a moment it looked like he was sobbing. The anger was still there at full time and, asked afterwards if this point was any use to them, Jordán replied with a single word: “No.”

Yet this draw took Sevilla out of the relegation zone, a little light brought back in, one of those moments they could all hang on to, the kind of experience that sometimes forges teams. Up at the top of the north stand, meanwhile, 400 of the 10,000 fans who requested tickets were going wild. Below them, so was the sporting director, Monchi, beating at his chest and blowing kisses, getting into another confrontation when he finally made way, Sergio Canales among those having a few choice words. Down in the tunnel, the referee’s report said, there was an “altercation”: when he had come out to see what was going on, though, they all scarpered like schoolkids the moment teacher turns up. “We weren’t able to identify any of them,” he wrote.

“When you celebrate a draw, there’s nothing more to say,” Betis midfielder Guido Rodríguez claimed, but there’s always something to say. “Well, this is a derby,” said González as Gudelj paced about behind him. 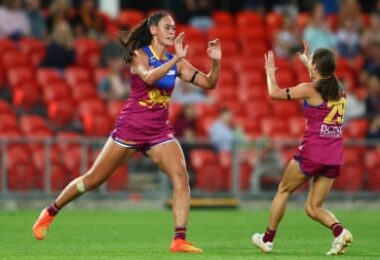