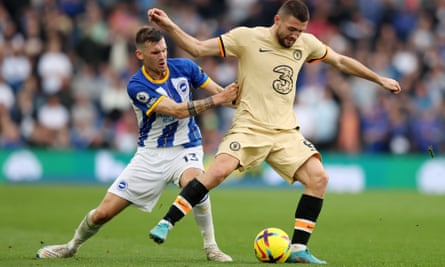 For the Premier League to evolve and continue to excite fans it needs fresh ideas and philosophies to help English football move forward. The new Brighton head coach, Roberto De Zerbi, is the latest innovator to make an immediate impact, impressing supporters, coaches and pundits with his style of play.

I did not know much about De Zerbi before he arrived, so I tried to find out how he fitted with Brighton’s philosophy, which has been smartly built over many years. They are a methodical operation and it looks already like he is another clever appointment.

The Italian’s predecessor, Graham Potter, found that out at the Amex, as his former club thrashed Chelsea 4-1 and Wolves will be wary of the added threat Brighton offer on Saturday.

It is rare that a head coach comes into a side to build on success; normally a change is required because the previous incumbent has been sacked due to poor form. De Zerbi has walked into a dressing room that was on the up under Potter and it can be hard to join a successful club. It is quite simple to spot the flaws in a struggling side and make them better, but to improve a good side can be much harder. Luckily, De Zerbi brings with him a level of innovation that has aided the transition.

Against Chelsea, the midfielder Pascal Gross started at right-back. De Zerbi would have identified Gross as having the capabilities to play right-back in his system. He knows how to explain the role to ensure that players know the reasoning behind it and how they can execute it for the benefit of the team. It brings greater flexibility with a squad. He will have been helped by the fact Potter frequently used players out of position, making them open-minded to different ideas from their new coach, something he is using to his advantage.

De Zerbi is very risky in how he wants his team to play out from the back and he seeks to create choreographed stages of play. He wants defenders to receive the ball in deeper areas, close to their own goal at times, and use their technical ability to withstand the pressure and find a way out. His centre-backs are his main players in terms of buildup; he wants to suck the press in from the opposition, lure them into a false sense of security and once the press is beaten they can move the ball up the pitch quickly, getting it to their main players in one-v-ones.

Against Chelsea, he highlighted that Kaoru Mitoma could isolate Trevoh Chalobah and Solly March could do the same with Marc Cucurella. Chelsea will have thought they could win the ball back with their press high up the pitch, but Brighton kept escaping.

Out of possession, Brighton are a little bit different in how they press compared with under Potter but there are still elements in their defensive structure they need to work on caused by the shift in terms of intensity.

De Zerbi is brave and looks an interesting character who the Brighton fans will buy into and like. It is always exciting to see a manager come in and shift the gears at a club. He is methodical in how he wants to achieve his tactical goals, similar to Pep Guardiola. He will pick one player or area to target within their philosophy.

Like Manchester City, Brighton are quite aggressive in how they press, but they build up differently; City do not play with as much risk as De Zerbi’s Brighton. In the first couple of games I thought it was too hazardous but that is because it is not what I am used to.

Brighton have highlighted someone who can work within the philosophy they have built over many years and put a new spin on it. That is exciting. If you bring in the same managers who repeat the same process, it can be quite boring for the fans. You see a little more of a twist and difference with De Zerbi. I like to see fresh ideas and to look at what managers do and learn, while questioning whether I would do the same thing.

Football does not stand still. When Guardiola and Jürgen Klopp arrived, other coaches needed to adapt and improve to try to counteract their brilliance. It will be an exciting challenge for all the coaches who come up against De Zerbi.

Sean Dyche said “the best coaches are thieves” and he is right. They travel the world to learn from others, picking up the best ideas to form their own style and philosophy before implementing it on a team. British coaches have gone around the world. Potter honed his skills in Sweden, Brendan Rodgers studied coaches in Spain and Eddie Howe spent time observing Diego Simeone at Atlético Madrid.

It is good for the Premier League, managers and teams to adapt and evolve. I like different spins and twists, otherwise things would become boring. We need a competitive edge and to solve problems. De Zerbi has come to the Premier League to test himself. Now it is the job of his rivals to push him to his limits.