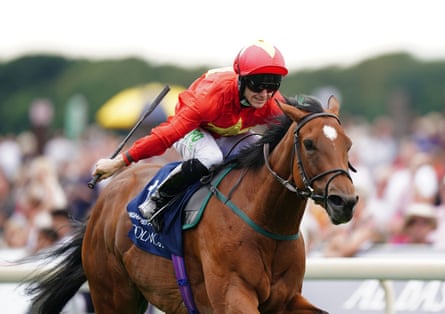 The European runners look a cut above their locally trained rivals in the Breeders’ Cup Mile at Keeneland on Saturday and Charlie Hills’s Pogo (7.10) is an interesting bet at around 16-1 to come home in front.

He is most familiar as a seven-furlong performer but that is often an ideal profile for the Mile winner on a typically sharp American turf course. Pogo also likes to race up with the pace, should get a good position from stall one, and his form behind Kinross – a 4-1 chance for this – in August suggests he should not be four times the price of Ralph Beckett’s gelding, who is drawn in the parking lot in stall 13.

Wincanton 12.40 ITV Racing’s 10-hour marathon could kick off with a win for Paul Nicholls’s Sabrina, who gets 15lb from the unbeaten Lady Adare and has promising conditional Freddie Gingell taking off another 10lb.

Wincanton 1.15 Useful hurdler McFabulous makes his chasing debut here but Sebastopol ran to a decent level several times last season and could well put his fencing experience to good use.

Doncaster 1.30 Sweet Believer has form on heavy ground and looks overpriced at around 4-1 to beat the early favourite, Life Of Dreams.

Wincanton 1.50 Frodon is tricky to weigh up, as he goes well fresh but was a little underwhelming for much of last season. A wind op may help, but Lord Accord, a winner at Cheltenham last month, could be a more solid option.

Aintree 2.11 Lifetime Ambition ran to a high level when second in a Grade One in April and is feasibly weighted on that form.

Down Royal 2.32 It will be interesting to see how Envoi Allen gets on stepping up to three miles but Galvin, with a race under his belt already this season, should get the better of his former stable companion.

Aintree 2.45 Dashel Drasher is better known as a chaser but has decent form over hurdles too and is likely to get his own way in front.

Wincanton 3.00 The progressive Knappers Hill is one to keep onside after shrugging off a big weight to win a valuable handicap at Chepstow last time.

Doncaster 3.13 Cemhaan, a thorough stayer who acts on heavy ground, looks to have been saved for this by a shrewd yard and makes plenty of appeal at around 12-1.

Keeneland 3.50 Ce Ce was a convincing winner of this race at Del Mar 12 months ago, has drawn well in stall four and is attractively priced at around 5-1 for a repeat.

Keeneland 4.29 Europe’s best sprinters have already succumbed to Highfield Princess at Group One level this season and she may well prove good enough to deny Golden Pal a third Breeders’ Cup success.

Keeneland 5.10 Cody’s Wish made a successful step up to Grade One level last time and is a solid favourite to follow up.

Keeneland 5.50 Nashwa heads the market for the Gosdens and Hollie Doyle but 6-4 looks short in such a competitive race. Joseph O’Brien’s Above The Curve is lightly-raced and still improving, and good value at around 5-1 to give her trainer a second win in four years in this race.

Keeneland 6.30 A wide draw could make things a little trickier but the favourite, Jackie’s Warrior, should have enough in hand.

Keeneland 7.55 Nest, runner-up in the Kentucky Oaks in May, could edge out her stable-companion Malathaat in what looks like a Todd Pletcher head-to-head.

Keeneland 8.40 Apart from a sub-par run in the Derby, Nations Pride has done little wrong this season and can give Charlie Appleby his second Turf win in a row.

Keeneland 9.40 All eyes on Flightline as he bids for legend status and anything close to his astonishing dominance at Del Mar in September should be more than enough.