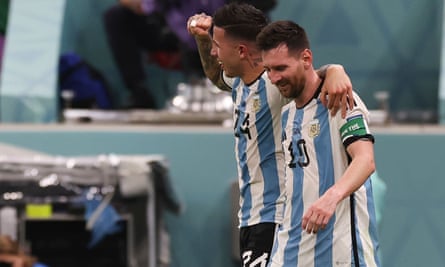 Listen, mortals, the sacred cry. Freedom, freedom, freedom. Suddenly, there it was, there he was, and it was all let out. In a moment, a flash of that left boot Lionel Messi was liberated and so were they, released with a single shot. All around this place, thousands of Argentinians absolutely lost it. Below them, so did Argentina’s captain, clinging hard to his last chance. He wasn’t going to let this end yet. Not just this game, not just this World Cup, but all of it.

It was too early for that, even as it started to feel late at Lusail, time slipping away. Perhaps the greatest career football has ever seen was drawing to a close, and like that. Quietly, sadly, no last dance, a failure to finish. Argentina knew that they needed to beat Mexico to continue and at times it felt like football needed them to win too, but an hour had gone and nothing had happened until it happened. The response, the bloody roar, felt like the world had willed it.

Given the ball and a yard of grass, Messi controlled and struck it low into the far corner. The shot was superb, but seen a thousand times; what followed may not have been seen once, perhaps comparable only to the Copa América final. He sprinted off wildly, a hint of Marco Tardelli to him, teammates chasing, leapt into Ángel Di María’s arms, then disappeared beneath the bodies. On the bench, Pablo Aimar, the assistant coach who is Messi’s idol, covered his face and cried.

By the time Messi appeared again, those looked like tears reaching for the surface of his eyes, which were gone. He stood arms wide, blowing kisses, shouting, out of it. This was a moment unlike any other and it lingered. Then he looked to the sky and spoke. To Maradona perhaps? Or Cecilia, the grandmother to whom almost all of his 788 goals have been dedicated.

They have not always held him like they did with Diego Maradona, who passed away two years and one day ago, but now they could not love him any more.

Those three consecutive finals lost have at last been understood as a reason to embrace him, not reject him. Argentina’s success at the 2021 Copa América was celebrated not just as their first trophy in 28 years, but almost an act of justice.

When the final whistle had gone then, Messi slipped to his knees and sobbed, teammates running to him, as if what mattered was not so much the country as their captain.

“Half the world would have run to hug him,” manager Lionel Scaloni said, and there was something in that which was played out in Qatar: there are countless Argentinians here but there are more Argentina fans; they came from everywhere to see him. They came to see this.

After that Copa América, Messi felt liberated, the coach said. And yet that embrace carried a hint of regret still, the desire for the ultimate story and the belief now that it could be told: winning this World Cup, his last.

It hadn’t started well. Argentina arrived unbeaten in 36 and then lost. It was not just that they might not win after all; they might not get through the first round. They had lost to Saudi Arabia, for goodness sake. It would be, it was suggested, the greatest catastrophe in their World Cup history. And maybe that wasn’t as absurd as it may have sounded. For Messi, it would have felt like it. That probably sounds ridiculous too, but go out here, and there would be nothing left, ever. The sun will come up tomorrow, Scaloni is fond of saying, but for Messi the footballer, it would not.

And the night that could be his last went on, that felt increasingly plausible. Scaloni has always sought to remove the fear, remind them football is a game, there to be enjoyed, not endured. But how could they?

There were too few signs of life, until Messi started to drive from deep at early in the second half. Until, at last the first shot came, and it was his. The second, Enzo Fernández’s brilliant curler, finally released the tension. For four days at least. There was relief, a shot at redemption still. Before the game, Argentina’s players had sung the national anthem: listen, mortals, the sacred cry; freedom, freedom, freedom. Then they stood for a photo, the tension on their faces captured forever. Behind them, staff wheeled away a giant inflatable World Cup. Messi wouldn’t let them take the real one, not yet.