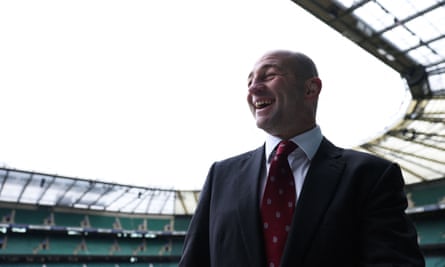 It used to be said that preparing for the 2023 Rugby World Cup was a gradual process. People liked to paint it as a painstaking four-year project, with an emphasis on steady incremental gains. Then everyone panicked. England, Wales and Australia have new head coaches with blank (ish) sheets of paper and there is an Old Testament feel to what happened just weeks ago.

Because, suddenly, the marathon is a flat-out mass sprint. The three unions in question are banking on the ability of, respectively, Steve Borthwick, Warren Gatland and Eddie Jones to accelerate their teams from 0-60 mph quicker than you can say Top Gear. It feels like one of those initially slow track cycling races where everyone starts to pedal like crazy.

The big question is which of the trio will prove most effective from their enforced standing start. In some ways, the pressure is slightly reduced because the timescale is so abbreviated; in other respects it has been seriously increased. At least Borthwick and Gatland have had some experience of the stresses and strains with the British & Irish Lions.

Jones, for his part, has a few more precious months until the Wallabies next take the field. Borthwick and Gatland have the fast-approaching Six Nations championship to deal with. All they can do is focus on the bare necessities. Which, most startup businesses would agree, is not 100% ideal.

Hence the absence of flam at England’s Six Nations squad announcement at Twickenham. Borthwick is a meticulous man, but there is barely a second to waste. He needs people to perform right here, right now, rather than dealing in potential. As Billy Vunipola, Jonny May and Jack Nowell have found, credit in the bank is now a finite concept as well.

Instead, clarity and simplicity are the new watchwords. Borthwick has picked his best players and those who have shown decent form recently. This should not be particularly newsworthy, but it almost feels radical after some of the selectorial meanderings of the last regime. Elliot Daly is back because he is playing well, not because he could be a decent utility bet at the World Cup. Ditto Ben Earl. And Max Malins. And Dan Cole.

“I have some fantastic players who are desperate to do well and desperate to build a team we can all be proud of,” said Borthwick. Sometimes just stating the obvious can be music to the ears.

Only the captaincy, which has reverted to Owen Farrell, felt like a direct throwback to the Jones era. Even here, though, Borthwick has sought to strengthen the structural foundations around his skipper by announcing Courtney Lawes and Ellis Genge as his vice-captains. By also confirming his intention to coach the forwards and use Richard Cockerill as a specialist scrum coach, it is clear enough where Borthwick’s short-term priorities lie.

A tighter, better organised and more focused England should emerge as a consequence. But at Test level those should be minimum standards. And how long will it take? With their rivals also finalising their squads there remains a sense that any new coach bounce would have more longevity in a non-World Cup year. There is, after all, a pressing reason why the Rugby Football Union and the Welsh Rugby Union opted to rip things up now: their rivals are well ahead of them.

Borthwick is already wary of what a more settled, cohesive Scotland will bring to Twickenham on 4 February. “I’d imagine they’d come here full of confidence and wanting to take a shot at us.” If Gatland, similarly, views his side’s opening fixture against Ireland through the prism of Leinster’s recent Champions Cup performances he has every reason to try to temper expectations.

No one, though, knows more than Gatland about the art of realigning a rugby team in double quick time. The wily competitor in him will also be keen to give Jones something to think about, with Wales and the Wallabies sharing the same World Cup pool. Australia will be freshly emboldened by Jones’s return, but the equation will be altered if Gatland can transform Wales’s battered self-belief and Justin Tipuric, for example, can sustain their form.

Bolstering fragile confidence will be Borthwick’s biggest challenge, too. Uncapped squad arrivals such as wingers Ollie Hassell-Collins and Caden Murley carry minimal baggage, but the same cannot be said of one or two others. A clean slate sounds great; it is less easy to deliver in mid-season in harsh weather with certain individuals still bruised by their past experiences on England duty.

Ultimately, it is more about restoring faith and trying to encourage players, at the very least, to enjoy their rugby. ‘Miracle coaches’ tend to be those who instinctively understand what style and gameplan will best suit the personnel at their disposal. England have loads of players and not enough coherence, Wales are looking to accelerate their rebuilding operation, Australia need to stop losing tight games and get all their best players back on the park.

It makes the next nine months even more fascinating. Have all three countries left it too late? Will their decisions to twist rather than stick prove collectively inspired? Or will the trend for 11th-hour reboots turn out to be misguided? Conventional logic suggests Borthwick, Gatland and Jones have their work cut out. If one of them wins the World Cup, though, their place in coaching’s all-time hall of fame will be assured.