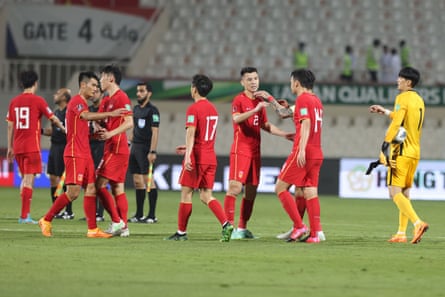 There cannot be many, if any, leagues that have been affected by the pandemic as much as the Chinese Super League. It was the first to deal with Covid-19 and, with China keeping stringent restrictions on daily life longer than elsewhere, the last to operate in tightly controlled conditions. With Beijing’s so-called zero-Covid policy recently abandoned, the country of 1.4bn people is finally opening up and this can only be good news for its beleaguered football industry.

2019 seems like a lifetime ago. Back then the league may have been losing a little of the lustre that made it one of the most-talked about in the world and some of the financial clout that had previously had coaches such as Antonio Conte, then of Chelsea, warning of the danger from the east, but the average attendance was still higher than anywhere else in Asia, at 24,000. There were still international stars such as Ezequiel Lavezzi, Graziano Pellè, Yannick Carrasco, Alex Teixeira, Javier Mascherano, Renato Augusto and Paulinho, and plenty of quality and excitement.

On the final day of that season, Guangzhou Evergrande pipped Beijing Guoan to the title and the celebrations in the city formerly known as Canton were surely heard in nearby Hong Kong. As they got their hands on the trophy, however, neither Paulinho nor the coach Fabio Cannavaro could have known that it would be eight months before the next season started and that everything would change in between.

From then, the Chinese Super League went from being one of the world’s highest-profile competitions to one where, for three years, most games took place in empty stadiums and centralised venues. Players were either stuck in hotels for months or, like Paulinho and Anderson Talisca in 2021, could not get back into the country from overseas and ended up being released from their contracts.

With no fans, games delayed for weeks and months and big players leaving, it is no wonder many lost interest. The Chinese Football Association paused what schedule there was for months so the national team could prepare for World Cup qualifiers (which had to be played overseas because opponents could not enter China), turning more people off.

It didn’t work anyway as Team Dragon did not get close to Qatar, ending qualification eight points behind Oman and a massive 17 behind the group winners, Saudi Arabia, home of a league that had replaced China as the go-to one in Asia for foreign stars even before the arrival of Cristiano Ronaldo. The Chinese Super League was not only never an option for the new Al Nassr player, but was never even mentioned as the remotest of possibilities or the wildest of rumours.

If another international failure was not a shock, neither were growing financial issues. With no fans buying tickets, sponsorship revenue falling and broadcasters losing interest because of the erratic scheduling, many clubs were soon struggling. In February 2021 the defending champions, Jiangsu FC, owned by the retail giant Suning, which is currently looking to sell Internazionale, folded. The financial struggles of property developers, hit by an overheated market, posed a bigger problem. Real estate companies owned, at least in part, more than half the top-tier clubs and, over time, more and more clubs could not pay salaries or utility bills.

At the end of the 2021 season Chongqing’s coach Chang Woe-ryong spoke for many when he broke down in tears and said: “I would like to say thank you to the players who overcame many difficulties this year. The reason I shed tears is because I felt so sorry for them and their families.”

There were plenty of other examples, such as Hebei FC, owned by China Fortune Land Development. “Since 2020, Hebei FC has run into unprecedented difficulties,” the club, who had not long said goodbye to Manuel Pellegrini, Mascherano and Lavezzi, said in 2021. “It is true that the club cannot pay water and electricity bills and travel expenses.”

Hebei’s financial issues resulted in a points deduction in November (two other clubs in the top tier and five in the second were hit with the same punishment), though relegation was already nailed on. There was a bigger name that dropped, however. Evergrande bought Guangzhou in 2010 and started the spending spree that spread around the country, buying stars who came to play for coaches such as Marcello Lippi and Luiz Felipe Scolari in front of average attendances of more than 40,000. The Reds were dominant over the next decade, with eight Chinese Super League and two Asian Champions League titles. In 2021 however, the property giant was $300bn in debt. The football team had become a distraction and was increasingly made up of rookie domestic players. Relegation was confirmed in December. The first of the big spenders going down really did mark the end of an era, though with other clubs who stayed up potentially going out of business, Guangzhou may get a reprieve.

The hope is that no more clubs fold. With zero-Covid abandoned, the country and economy opening up, there should soon be more ticket sales, sponsorship and broadcasting revenue. The signs are brighter in the property market too and about £400bn of credit was made available to cash-strapped real estate companies in December.

Whether that will feed through to clubs remains to be seen. There has not been much debate as to whether going back to the way things were is desirable – but that can wait. For now, fans can finally watch their teams play home and away for the first time since 2019. It looks as if something approaching normality – a relative term though that may be – is about to return to Chinese football.