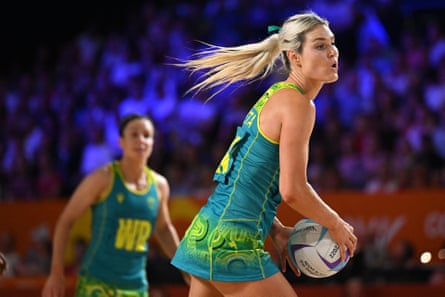 Liz Ellis often refers to shooters as the “princesses” of netball; the ponytail-tossing prima donnas who crave the spotlight. While said in jest, there’s some truth in the characterisation by Australia’s most capped netballer. That’s because it takes a particular type of self-assurance and composure to hold the hopes of a team, even a nation, quite literally in your hands.

It requires extra-special fortitude, then, for a player to head into a Test series to represent the No 1 side in the world – who won every trophy on offer last year – in the knowledge that their performance may all but determine selection for the upcoming World Cup.

Vice-captain Wood, Austin and Koenen – all part of the squad that won Commonwealth gold – and Dwyer and Garbin must be acutely aware that Stacey Marinkovich will take only four shooters back to Cape Town for the World Cup in late July.

They will also be aware that Gretel Bueta, who dominated the world stage in 2022 but didn’t make herself available for this series after suffering a miscarriage last year, looms large in the Diamonds coach’s thinking.

Also missing from the upcoming tour to South Africa but in the World Cup mix is Bueta’s domestic teammate Donnell Wallam, who debuted in sensational fashion in October after being at the eye of the Hancock Prospecting sponsorship storm.

Wallam, just the third Indigenous woman to represent the Diamonds, was unlucky not to be named for the Quad Series but still has a Super Netball season to impress Marinkovich. The national coach can only take 12 players – traditionally four shooters, defenders and midcourters – to the showpiece event.

With five shooters on tour and two at home, the maths is clear: seven into four doesn’t go.

Bueta, who according to Marinkovich “certainly hasn’t retired”, is first picked in any Diamonds side. Veteran Wood is a lock for her 45 caps of experience alone and Koenen’s ability to play multiple styles and positions makes her the most likely third.

The final slot could go to Austin, Garbin or Wallam, who the coach says is “definitely still in the picture”. Given how little exposure 22-year-old Dwyer has had, she seems unlikely to make the cut.

Austin and Garbin have fired and faltered at different times in the gold dress, so what they can produce in the series will be instructive. But it will all come down to Bueta.

Marinkovich’s oft-quoted “squad mentality” is a key part of her approach, but Bueta isn’t just any squad member. As one of the few truly “un-match-up-able” players in the world game – creative and athletic in ways few others are or have been – she is the sun that all other Diamond players orbit around. Selections should reflect that.

In defence, the Diamonds will miss the knowledge and grind of Jo Weston, a late withdrawal for the series after injuring a calf in camp. Tara Hinchliffe replaces Weston, but she’s purely a placeholder for the 28-year-old Vixen, who’ll be at the World Cup barring disaster, especially given her impact in October’s Constellation Cup. After missing the two lost Tests in New Zealand, Weston returned for the two home fixtures and was a defining factor in wresting the trophy back.

She looks set to be joined at the World Cup by Quad Series defenders Courtney Bruce, Sarah Klau and Sunday Aryang, who has inched ahead of Maddy Turner and Ruby-Bakewell Doran as Marinkovich’s preferred fourth circle defender. That four would be a carbon copy of the Commonwealth Games line-up.

In the midcourt, Ash Brazill will be trying to re-cement a place, after taking a break post-Games in a move some thought would leave her on the outer. She returns at the expense of Amy Parmenter, who couldn’t have done much more in her first six Tests last year. She may struggle to get her bib back if Brazill can hit top gear.

Brazill is joined by fellow Commonwealth Games gold medallists Liz Watson, Paige Hadley and Kate Moloney in the Quad squad, as well as Jamie-Lee Price, who didn’t make the final 12 for Birmingham. Price will be looking to put her name up in lights to move ahead of Moloney.

With a rebuilding Silver Ferns outfit that looks like it means business, South Africa back under the watchful eye of Norma Plummer and an England team searching for the right balance between experience and youth, there will be plenty of narratives to watch, but which Aussie “princess” writes her way into a World Cup fairytale might be the most compelling.