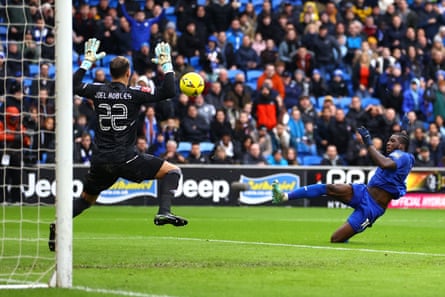 Half a week is a long time in football. On Thursday, for 45 minutes, Chelsea were good enough to make Manchester City look pedestrian. On Sunday, they were so poor that City located their unstoppable mode, which had gone missing since mid-October. Chelsea are now out of both domestic cups, and in the Premier League, after scraping one win from their past eight games, they are closer to the bottom (13 points ahead of Southampton) than the top (19 behind Arsenal). Top four? They’re not even in the top four in London, with Brentford and Fulham lording it over them, never mind Arsenal and Spurs. The new owners may say the days of hire-and-fire are gone, but Graham Potter seems to be all tinkering and no rapport with his squad. If he loses at Craven Cottage on Thursday, will he still be there to face Palace on Sunday? Tim de Lisle

Cardiff are the Championship’s lowest scorers but on Sunday, during a first half in which they opened up a shock two-goal lead, Leeds made them look somewhat free-scoring. A back four of Rasmus Kristensen, Diego Llorente, Pascal Struijk and Junior Firpo, signed at a combined cost of more than £40m, were not convincing in front of backup goalkeeper Joel Robles, who also struggled. Firpo’s cute backheel was the catalyst for Sonny Perkins’s stoppage-time equaliser but it was an afternoon for Jesse Marsch’s defenders, aside from the substitute Max Wöber who solidified Leeds on debut, to largely forget. “I think a big turning point in the match is when Pascal unnecessarily plays back to Joel and it goes out for a corner-kick [on six minutes] and now they [Cardiff] have a chance to feel like they can come into the match, and their crowd came into the match,” Marsch said. “We invited them [on to us].” Ben Fisher

Julen Lopetegui’s Wolves CV shows two wins, a defeat and two draws though he might have had a third victory if the VAR at Anfield enjoyed the same angle as the “tactical camera” he viewed when Toti’s 80th-minute strike was ruled offside. The Spanish coach is already impressing and Nathan Collins explained how. “The World Cup break was like a mini pre-season. He drilled us every day, meetings every day, on the pitch, off the pitch and drilled everything into us. It was good for us and well needed. We went to Marbella for a week. He has injected a bit of energy. We trust him, he trusts us and the relationship is just so good. We are backing each other and fighting for each other,” said the defender. “We have always had the players, it was just finding that and he has given us belief. We trust him and he trusts us. Straight away what he has done tactically for every game has been spot on nearly.” Jamie Jackson

On 8 January 2022, Newcastle United were humbled by League One’s Cambridge United. On 7 January 2023, Newcastle United were humbled by League One’s Sheffield Wednesday. A year in which much has changed has also seen much stay the same. Eddie Howe now has a first XI whose value vastly outstrips the sum of its parts. But here, sandwiched between a visit to Arsenal and a Carabao Cup quarter-final, Howe elected to test his squad depth – the eight rotated in had shared just 1,002 league minutes between them this season and more than half of those minutes belonged to Jacob Murphy. Alexander Isak aside, if any of the others moved to Championship clubs, no one would bat an eyelid. There remains work to do. Sam Dalling

5) Gil puts himself in derby contention

It is rare that a player can find his way back at a club after being on the end of the kind of treatment that Bryan Gil received from Antonio Conte at Tottenham. When Conte arrived as the manager in November 2021, he did not fancy the winger, starting him only twice – NS Mura away, Morecambe at home (neither went well for Gil) – loaning him to Valencia in January and then saying that the club had not done their homework before signing him. Conte said Gil was not strong enough physically and, pre-World Cup, he continued to overlook him. And yet here we are, with Gil having started three matches in a row and hoping to be a solution in Sunday’s derby against Arsenal. Injuries to Dejan Kulusevki, Richarlison and Lucas Moura have forced Conte’s hand. But Gil was really good at Crystal Palace, prompting Conte to compare him to Bernardo Silva, and he was lively against Portsmouth on Saturday. The hope at Spurs is that Kulusevski will be fit for Arsenal. If not, Gil has given Conte a decision to make. David Hytner

6) Brighton continue to fly under radar

What price Brighton beat Chelsea – and their old manager Graham Potter – to a Champions League place this spring? Or maybe even a Europa League slot. Brighton rarely attract headlines but, as they emphasised during Saturday’s 5-1 deconstruction of a decent Middlesbrough side, Roberto De Zerbi’s team are very good indeed. “I though we did really well actually,” said Boro manager Michael Carrick in the aftermath of a tie featuring two goals from World Cup winner Alexis Mac Allister. “Brighton have so much quality; a lot of people don’t appreciate how good they’ve become. They’ve built on what Graham Potter left behind.” While Mac Allister shone, Pascal Gross and Solly March were also outstanding. Maybe De Zerbi can follow his managerial namesakes Martínez (Wigan), Mancini (Manchester City) and Di Matteo (Chelsea) in winning the FA Cup? Louise Taylor

A sense of the trust Erik ten Hag has banked as Manchester United manager can be found in the positive reaction to him assessing Wout Weghorst, the 6ft 6in Besiktas striker on loan from Burnley, as a January target. This is a 30-year-old whose record of two strikes in 20 Premier League appearances lays Ten Hag open to lazy criticism that the Dutchman’s principles of play are moving towards route one. But United’s current record of 10 victories from their last 11 games has been achieved via increasingly composed football and every off-field decision made by Ten Hag also seems to be working – disciplining Marcus Rashford for oversleeping, for example. Weghorst’s candidacy as a potential signing can accentuate not damage United’s upward trajectory. In sport the only way to control the message is to win: continue to do so and Ten Hag can make decisions without major criticism. JJ

While Wrexham and their supporters headed back to north Wales in party mood, their win showed much of what Mark Robins must deal with at Coventry. The tousle-haired Manchester United and Norwich striker is now a battle-hardened manager dealing with harsh financial realities. Local businessman Doug King’s takeover is expected soon but will not change Coventry in the fashion Rob McElhenney and Ryan Reynolds’s arrival has for Wrexham. Robins is doing a fine job, with City four points off a Championship playoff place. That in mind, he made six changes and paid the price. “The most embarrassed I have felt in the first 60 minutes of any football match that I have managed,” said Robins. “I can’t risk things too much because otherwise the rest of the season is at stake, not just one game.” The cost went deeper than embarrassment. Fábio Tavares’ achilles injury ended his season, placing a heavier striking burden on Viktor Gyökeres. John Brewin

Carlos Corberán made wholesale changes to his West Brom team but will have found little encouragement in the performances of his fringe players. Brandon Thomas-Asante impressed with his finishes for two goals, but there was little else to shout about in their dramatic draw at National League side Chesterfield. This was a chance for those who spend most weeks on the bench to prove to their head coach they can be relied upon for what will be a tough Championship run-in. The club are back in the promotion race after coming into form under the Spaniard but they will need to be able to rely on all their squad to maintain momentum. The good news for the squad players is they will get another chance to show what they can do in the replay. Will Unwin

On pure numbers, Kelechi Iheanacho is already an FA Cup legend. His goal in the 1-0 win against Gillingham was his 16th in the competition, and since his debut in 2016 nobody has scored more. Here he occupied what is perhaps his most effective role: a foil for Jamie Vardy, making unconventional runs, doing most of his work around the edge of the box. But with Vardy in decline and Patson Daka still yet to make the required impact, the need for Iheanacho to step up has never been greater. He is now 26 and no longer has time on his side. Time to translate his Cup magic into the league. Jonathan Liew