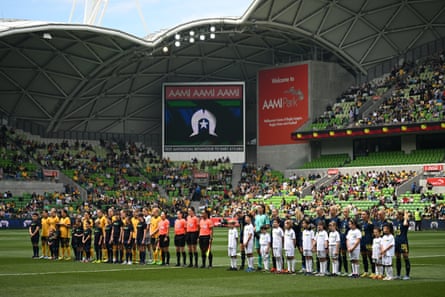 Last week, Matildas’ coach Tony Gustavsson cut a customarily jovial figure as he helped announce February’s Cup of Nations. The Swede had good reason to be convivial; the mini-tournament provides a chance to continue momentum from a successful November international window with a group-stage simulation against Spain, Jamaica and Czechia across Sydney, Gosford and Newcastle.

The New South Wales slant of the host cities is clear, and has been met with predictable reactions. In the wake of furious backlash to the Australian Professional Leagues’s sale of hosting rights for the next three A-Leagues grand finals to Sydney, Football Australia’s announcement that the Matildas’ next outings will be played exclusively in NSW was inevitably going to be conflated – even though the APL and FA are completely separate decision-making bodies.

“Can you please start calling yourselves the NSW Matildas?” a response on Facebook asked. But do the comment sections have a point? Is there a bias toward New South Wales? Looking at the numbers, yes.

But there’s some context. To start, the vast majority of Socceroos and Matildas internationals take place overseas: over 150 competitive matches and friendlies have been played beyond Australian shores since the start of 2010.

Of the fixtures played on home soil, nevertheless, there is a statistical basis that shows NSW is a preferred host. Since 2010, the state, per data supplied by Football Australia, has hosted 57% of the Matildas’ home games and 46% of the Socceroos. Victoria follows next with 14% of women’s and 26% of men’s senior national team games, with Queensland the only other state to host a double-digit percentage – 17% of Matildas games since 2010 and 15% of men’s.

On a more localised level, Sydney has hosted 33% of Matildas games, followed by Brisbane with 14%, and Melbourne and Newcastle with 10%. The Harbour City has hosted 44% of Socceroos’ games across the period, with Melbourne’s 24% and Brisbane’s 14% the only other double-digit percentage hosts.

So why the disproportionality? One of the biggest factors is that the NSW government has simply been consistently far more willing to invest properly in hosting international football than other states; the upcoming Cup of Nations, for example, is being staged in partnership with Destination NSW. This, in theory, then frees up Football Australia to invest revenue that otherwise would have been spent on staging games elsewhere.

“We don’t run sport, but we are always happy to partner, as we are with Football Australia, in supporting what sporting organisations want to do,” said NSW minister for sport, Alister Henskens. “We, unashamedly, want to have the best sporting tournaments in Australia here in NSW.”

In recent times, there have also been other, external factors forcing the issue. The Matildas’ 2020 Olympic qualifiers, for example, were hastily moved to NSW by the Asian Football Confederation amid concerns over a new, highly communicable virus emerging in the games’ original host city, Wuhan. When international football was subsequently sent overseas by Australia’s strict Covid border control policies, only the NSW government was willing to institute bespoke protocols that would allow the Matildas and Socceroos to stage home fixtures with restrictions still in effect a year and a half later.

In 2022, the first year Australia was mostly free of Covid policies, the Matildas played six times at home but only once in Sydney: a 2-1 loss to Canada in the first football match played at the new Allianz Stadium. Just one other game was staged in NSW, a 2-0 win over Thailand in Gosford, with the others spread across Townsville, Canberra, Brisbane and Melbourne. With a Women’s World Cup on the horizon, Adelaide’s Hindmarsh Stadium and Perth Oval were both undergoing renovations during this period to bring them up to international standard.

Playing three games in Australia during a World Cup year, the Socceroos spread their fixtures across Melbourne, Sydney and Brisbane.

“There are many factors which go into determining where matches are ultimately played including venue availability and size of venue against expected demand, plus team movement and logistics.

“There is also a commercial reality to any national team match, as staging games and hosting touring teams is an expensive exercise, so that’s where Football Australia works with state and territory governments around their appetite to financially support the hosting of national team content.

“Football Australia is committed to taking our senior and youth national teams to as many parts of Australia as possible and is eager to work with all state and territory governments to make this a reality.”