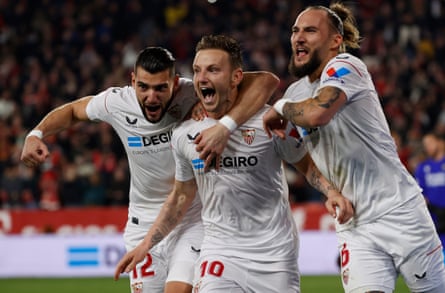 Ivan Rakitic seemed to be trying not to look up and he wasn’t listening either, not when Alejandro Hernández Hernández came for one of those pointless pep talks referees like so much. He’d taken penalties before, thank you very much. And even if his mother-in-law once sent him a picture of a labrador with a ball at its paws and the message, “your dog takes them better than you”, he’s not bad either: he had done it in the derby, rolled in at Madrid to keep Sevilla in the title race, and is the only player to be put on the spot two World Cup shootouts in a row, scoring the decisive fifth to take Croatia into the quarters and semis in 2018, the coolest man in football.

This was a bit different, another kind of pressure. Conan stood before him. Rakitic averted his gaze, took refuge in routine, eyes only for the ball, which he put down, picked up and put down again, carefully nestling it in the grass. He straightened his shin pads, pulled up his left sock, sharp, then his right; wiped his face, sniffed, paused and took a deep breath. Then he stepped left and set off on an arching run that ended with the ball in the net. He went right, kissing his wrist, and the place went wild. Up in the main stand, the sporting director sobbed, then on the final whistle he set off down the stairs to embrace Rakitic, squeezing so tight for so long it was a wonder he could breathe. This was big.

Wait: big? Ivan Rakitic Penalty Beats 19th-placed Cádiz 1-0 at Home in Week 18 isn’t news, even if the clock does say 88.08 when the ball goes in. It isn’t supposed to be news, anyway. On Saturday night, it was. The news they wanted so badly. “Agonising and Crucial,” Diario de Sevilla called it. Want a headline? How about this from AS: “Rakitic Recuses Sevilla”. Or Marca: “Rakitic Lifesaver”. Late Ivan Rakitic Penalty Rescues Club, Coach and President, Averts Crisis and Stops War might just about do it.

This time last year, Sevilla believed a title challenge was a possibility, not just resisting the pressure to sell, thus breaking their own model, but signing Antony Martial and Jesús Manuel Corona – the only footballer named after a beer – one last push in the face of a unique opportunity. Their hopes slipped with a draw at Osasuna in early February when Rakitic missed a last-minute penalty – although they were briefly revived with victory over rivals Betis at the end of the month, when he scored one – but they still finished with a third consecutive Champions League place and a ninth consecutive season qualifying for Europe. Which is where they are supposed to be.

No longer: a lot has changed in 12 months. Pretty much everything, in fact. Sevilla played Cádiz in January last year too, winning 1-0 with a Lucas Ocampos goal. They had gone into that game having just defeated Atlético Madrid and were second with 38 points from 18 games. They came into this Saturday’s game with 23 points fewer – 16 places lower – from 17 games. The team that lost only once at home in the whole of last season had won only once there in the whole of this. If Cádiz were in the same place now as they were then – second-bottom – Sevilla were now third-bottom. Sevilla-Cádiz had become a relegation clash.

The whole thing had become a crisis. At the club’s training ground, graffiti appeared accusing the board and the squad; warning that if they were relegated there would be nowhere to hide. The possibility feels real now, the fear too. Sevilla should be too good to go down; watching them as the weeks pass it became increasingly hard to avoid the feeling that they were too bad to stay up. They had sold their first-choice centre-backs in the summer, and even Jules Koundé and Diego Carlos going was not enough: Sevilla have the fourth-biggest budget in Spain but needed to reduce costs, and had resisted doing so a little too long. Their ordinary income is around €180m, Monchi, their sporting director, admits, when the costs are closer to €230m, Champions League elimination exacerbating their problems. Current financial targets depend on €38m worth of sales.

The replacements weren’t cheap and haven’t worked. Look at the new signings and none has made an impact: Marcão (€12m) has started four games, Tanguy Nianzou 10, a €16m signing with whom accidents keep happening, his confidence on the floor. Alex Telles, currently injured, has started seven. Kasper Dolberg and Isco, the latter signed for the manager they sacked, have already gone. Adnan Januzaj should be going, but might be stuck. He has played 48 minutes. Tecatito broke his leg. Ocampos left in the summer and has just come back, rescued from Ajax in the hope he can rescue them.

The squad is imbalanced, slow and getting on a bit. Their top scorers in the league (Rafa Mir, Érik Lamela and Óliver Torres) have three each. Youssef En-Nesyri doesn’t have one. Monchi, so often seen as a miracle worker, faces criticism in his home for almost the first time. “There are three players on the right wing, none on the left,” the coach says, publicly.

That coach is Jorge Sampaoli, their second of the season and another man returning to the club. After a bad start to this campaign which was the continuation of a pretty bad end to last, Sevilla tried sacking Julen Lopetegui in early October when, if they were going to do it at all, they should have done it sooner, a sense of sadness clinging to the end. It hasn’t worked: under Sampaoli, there had been no real improvement. Lopetegui had five points from seven matches; Sampaoli came into this weekend with 10 from 10.

Nor is it just the stats. His style, which as he very pointedly says they knew was his style, has brought risks and few rewards. There is a sense of dissatisfaction, even resignation, his public statements increasingly blunt, blame pushed elsewhere recently, a sense of his flailing at a situation beyond his control. He openly admits he no longer expects the signings he requested; in turn, trust that he’s the right man diminishes. Utterances like “whether I took the right decision [coming], if they lied to me or not, is an issue for me and the directors, behind closed doors,” don’t exactly speak of confidence. Or indeed, closed doors.

Behind it, a battle rages for the club – and that’s public too. José María del Nido, the former president and single biggest shareholder, is in open conflict with the group that controls the club, including his own son. Furiously joining in chants for the president Pepe Castro to resign, Del Nido Sr tried to force a change of administration at the AGM. With the backing of the investment fund that props up Castro (for how long?) that was blocked, Del Nido unable to vote, but it will end in court. And at that meeting 57% voted against approving Castro’s management and the accounts for 2021-22, which showed a €24m loss. This week supporters’ groups protested against the current administration, but that was not a show of support for the pretender: Del Nido was also subject to chants as thousands of fans gathered at the Pizjuán before the game.

All that, Sampaoli says, “contaminates” everything; this, he says, is a club with “institutional, political, market and sporting problems”, the Cádiz game elevated to something so much bigger for everyone. “This is the hardest situation I have ever had,” he had admitted. “We can’t pay much attention to the protests, because if we do it will create anxiety, fear, an urgency and that doesn’t help at all. Reproach is easy and unity is difficult but only unity will get Sevilla out of here.”

Unity and goals. But with Sampaoli hopping about in his tracksuit, beard and beanie hat, like Popeye playing Papa Smurf, goals just weren’t coming. On a night where the fans drew a clear line between the protests and the game itself, roaring the team on from first minute to last, Lamela had a lovely opener ruled out for offside, Monchi steaming down to the touchline at half-time and booting a water bottle about. Denied then, the shot count continued to rise but the score didn’t change. There was something almost slapstick in their attempts to score, comically cruel: “It’s not coming, it’s not coming,” as Rakitic put it afterwards. Until, with three minutes left and Sampaoli sent off for a second game, head gone again, it did.

A daft handball from Iván Alejo put Rakitic on the spot. He had been here before, many times, if maybe never quite like this. All that weight on him, one shot to pull them out of the abyss, dragging them up to fifteenth and out of the crisis, to save them all for another week at least. In front of him, Conan stood looming, but he wasn’t looking. And then he started his run up and scored, the Ramón Sánchez Pizjuán exploding all around him. “With the greatest of respect to Cádiz and their goalkeeper, I knew I would,” he said.