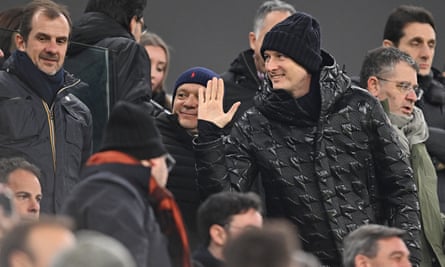 For a couple of hours, Juventus allowed themselves to forget. The buildup to their game against Atalanta had been overshadowed by news of a 15-point penalty, a punishment nobody saw coming. Even the prosecutor leading the case against them had only asked for nine.

Anger at that decision was palpable inside the Allianz Stadium. The Serie A anthem was loudly whistled and the positioning of league-branded materials on the pitch before kickoff met with hostile chanting. A banner hung by fans on the gates outside read: “Serie A or Serie B, we are always here. Only for Juventus FC.”

And then a football match broke out. The Hives song Come On hammered out over the public address as the players lined up and when the music stopped it seemed as though both sets of players had carried that pummelling drumbeat with them, playing with a tempo and aggression rarely seen at this venue lately.

Atalanta opened the scoring when Wojciech Szczesny allowed Ademola Lookman’s shot to go through him at the near post, but Juventus roared back to lead before half-time. Ángel Di María converted a penalty after Nicolò Fagioli was brought down and then combined with the Italian to set up another goal, releasing his team-mate down the right with a Cruyff style heel flick. Arkadiusz Milik met the subsequent cross with a brilliant volley into the bottom corner.

The game see-sawed back in Atalanta’s favour, Joakim Maehle equalising at the apex of a passing triangle constructed by Giorgio Scalvini and Lookman. The latter player put his team back in front, heading home a cross from Jérémie Boga.

Still, it wasn’t finished. In the 65th minute, Juventus won a free-kick on the edge of the box and Di María feigned to shoot before rolling the ball back under his boot for Danilo, who sent a daisy cutter beneath the wall. Players rushed to retrieve the ball with the urgency of a team losing in a cup final. The manager, Massimiliano Allegri, pumped his fists furiously on the sideline.

The game finished 3-3, though not for want of effort on both sides to find a winner At full-time, Di María and Allegri each insisted that a top four finish for Juventus was still possible.

Nobody knows if they will be allowed into the Champions League next season if they make it. In the wake of Friday’s ruling by the Italian Football Federation (FIGC), Uefa are expected to conduct their own investigations to determine whether Juventus breached the terms of their financial fair play settlement agreement. There are further layers of this onion to be unpeeled in the meantime.

We do not yet know the official reasons for the Serie A points penalty. The punishment was announced on Friday, but the FIGC have until 30 January to publisha full verdict. We only have the case made by the prosecutor, who accused Juventus of artificially inflating revenues by assigning unrealistic values to footballers swapped in exchange deals with other clubs.

The amortisation of transfer fees allows teams to spread the cost of any player they sign across the length of their contract. So if a club buys player A for €5m on a five-year deal, and sells player B for the same fee, they can effectively write up a €4m profit on the balance sheet for that year.

This is legal and common practice in football, but Juventus were accused of taking things too far, deploying a system of unrealistically-valued swaps to make themselves look better off than they were. The FIGC prosecutor, Giuseppe Chinè, argued that this created unfair competitive advantage.

An initial investigation into the misuse of ‘plusvalenze’ (capital gains) had ended with Juventus and 10 other clubs all being absolved in April last year, the FIGC concluding that it was impossible to assign objective values to footballers. Separately, however, public prosecutors in Turin had been conducting their own investigation – named as Prisma – into Juventus’s actions. The club is listed on the stock exchange, so false financial reporting could be a criminal offence.

Through wiretaps and searches of the club’s offices, they unearthed conversations and documentsabout Juventus. It was this fresh evidence that led the FIGC to reopen its case against the club.

Juventus firmly deny all wrongdoing and will appeal their points deduction, as well as the lengthy bans handed out to former and current directors, to the Italian Olympic Committee (CONI)’s Sports Guarantee Board. That body can overturn the FIGC’s ruling only on procedural grounds. It cannot consider the merits of the case. The club is expected to argue that they have been subjected to double jeopardy, and that no actual sporting law has been broken.

After that, their next recourse would be to the European Court of Arbitration for Sport [Cas]. The truth is, though, that we are only at the tip of the iceberg with what could happen next. Preliminary hearings for a potential criminal case stemming from the Prisma investigation will be heard in March.

There is a whole separate thread to the Turin prosecutors’ findings, relating to an agreement by players to waive part of their salaries during the Covid-19 pandemic. Juventus released a statement in March 2020 saying that a pay cut equivalent to four months’ wages had been agreed but are accused of redirecting money into bonuses to make up the difference.

On the sporting side, meanwhile, it remains possible that other clubs may be drawn in. The newspaper La Repubblica reported on Sunday that Chiné has requested to see evidence gathered by the public prosecutor in Naples during an investigation into Napoli.

Juventus presented a united front this weekend, with John Elkann, chief executive of Exor, the holding company with a controlling stake in the club, attending the Atalanta game in person. The new CEO, Maurizio Scanavino, distanced the club from the “pseudo-fans who used a language of hatred and threat towards the Italian Football Federation, Gravina, his family and the prosecutor Chinè” while reasserting that: “we will defend ourselves decisively and forcefully but always with professionalism, respect and expertise, in the right ways and the appropriate places.”

Atalanta are one of the clubs who stand to benefit from Juventus’s points penalty, ending the weekend fifth in the table and two points outside the top four. They have begun the year in electric form, scoring 20 goals in five games between Serie A and the Coppa Italia.

Yet their manager, Gian Piero Gasperini, was not eager to revel in Juventus’s fall. “When points get deducted in the middle of a season,” he said, “that’s never a good sign for football.”