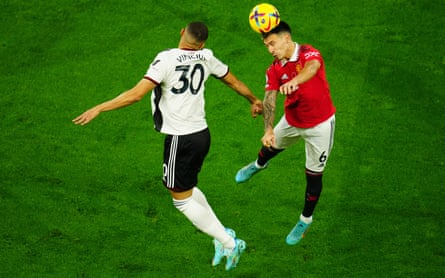 After one minute of Manchester United’s game against Liverpool in August, you knew: Lisandro Martínez is for real. Because that was when he clattered, then barged through Mohamed Salah for no apparent reason and no obvious gain.

English football’s frequently toxic and forever self-mythologising rhetoric tells us this is just how big men behave. But reality is different: save, perhaps, an airport, there’s nowhere safer to start a row than on a Premier League pitch, because the chances of reprisals are almost zero. Consider, for example, Martin Keown and Ruud van Nistelrooy: jumping on someone from behind works well in football’s posturing pantomime, but in a square go the sensible money would be on the martial artist able to exercise self-control because he knows there’s no serious threat.

So, while Martínez getting involved with an amused, bemused Salah taught us nothing of his physical prowess, it said plenty about his mental impregnability. He had endured a disastrous start to his career in England, playing poorly as United lost to Brighton in August before being subbed at half-time against Brentford with his team 4-0 down. After that game, Jamie Carragher, a respected judge and with good reason, left no room for doubt: Martínez was too small to cope with the physical aspect of – depending on your sensibility – “this league” or “our league”.

In such context, for Martínez to do what he did to a player as brilliant as Salah speaks volumes, because the potential for swift, humiliating revenge was significant. Which is to say his aggression is neither performative nor contingent, just as his confidence isn’t frail or manufactured; rather, he does whatever he deems necessary regardless of any external factors that may sway others.

Something similar then happened last month, when United met Villa in a league and Carabao Cup double-header. After the first game, Leon Bailey was so perturbed by Martínez’s combative style that he used Twitter to voice his displeasure, despite having scored a fine goal in a fine win for his side. “Very disappointed in the referees today. I couldn’t breathe for a second after getting elbowed twice in my rib,” he said. “The linesman went on to say I shouldn’t be saying anything because I was doing just the same thing to Martinez. Sometimes I don’t understand why we got VAR. SMH.”

Four days later, United met Villa again and Bailey, still smarting, found time to go at Martínez – who did not come on until the 87th minute – at the first available opportunity, hanging in a tackle for the afters. Then, after losing a grapple that left him on the floor, he lost the run of himself, pushing and kicking out. But there was no retaliation, Martínez looking down at him with a dead-eyed mixture of ambivalence and contempt because though a battle with him is demanding and fierce, it is controlled not emotional, practical not personal, and solely about the game, which was effectively over.

Indisputably, Martínez’s bellicosity works well for him: since that Liverpool game, he has been almost uniformly sensational. It is rare enough to see a centre-back who teams hostility, agility, composure, intelligence and technique, but to see one do it at the age of 24, while also being fun to watch, is especially unusual.

Against Liverpool, United’s first goal came about because Martínez, receiving the ball 35 yards from goal, opted to punch an immediate and authoritative pass – what we might call a Roy Keane pass – into feet, when others would have taken a touch then gone backwards or sideways. His ability on the ball also gives opponents problems when they press him high, because they must simultaneously cover the straight pass and the big switch out wide, without selling themselves, so that he can stroll past them and create an overload in midfield.

As with the physical stuff, none of the skilful stuff means anything without the mentality to underpin it. Its lack has defined the Post-Fergie Wilderness Years just as much as a lack of quality. What marks out the players signed by Erik ten Hag is their willingness to assume responsibility, showing the nous to assess situations wisely, the imagination to try things and the moxie to act decisively.

Like many Argentinian defenders, Martínez was, it seems, born with an internal GPS system telling him the precise whereabouts of the line at all times, from which he never strays far. Generally eschewing the kind of attention-seeking violence that can hurt people, his desire to get close to an opponent allows him to tangle bodies and legs, creating reasonable doubt in the minds of officials that red cards are yellow cards, that yellow cards are free-kicks and free-kicks are comings together.

Nor has his height yet been an impediment. Most teams don’t play two big men up front – many don’t play even one – nor do they hit long, aerial balls. But even so, those who doubted Martínez’s ability to handle the fearsome might of Chris Wood, Ché Adams and their ilk would have done well to listen to Ten Hag, who did not say much but said enough: “He has good timing.”

Nevertheless, there is more to it than that. Timing means little without intensity and Martínez contests aerial challenges like a piranha on a trampoline whether winning the ball, making a block or doing just enough.

This spirit is contagious. Alongside Martínez, Victor Lindelöf and Raphaël Varane are more aggressive; behind him, David de Gea now comes for crosses and passes the ball out. But perhaps the biggest change has been in the man to his left. Growing up, Luke Shaw stood out at every level, his talent so immense that his easygoing attitude didn’t really hinder him until he reached elite level.

He did, under Ole Gunnar Solskjær, finally establish himself as an automatic choice just when his time at Old Trafford looked up, only to drop off again post-Euros. As such, it was less surprising he lost his place to Tyrell Malacia than it was when he regained it and retained it, then volunteered to fill in for Martínez at centre-back.

Martínez looks to be a big part of this changed demeanour. At the end of a hard-won home win over West Ham in October – in which he again displayed the fearlessness that defines him – he led celebrations with teammates and crowd. But after that he sought out Shaw, not to congratulate but to cajole, displaying the kind of confrontational leadership that links many of the club’s most important and revered players; players who could be relied upon to deliver consistently and in the clutch, inspiring those around them never to let themselves off; players who stood for something. You don’t have to be tall to be a giant.

None of this is to say that Martínez is perfect. In the season’s first Manchester derby in October – though he was afforded little midfield ballast, and without him his team would have been even further behind at half-time – he stood off Erling Haaland at various points and must come up with something different on Saturday. Similarly, when United conceded twice in the first 11 minutes in the league game at Villa – though he was again compromised by the midfield, this time absent anyone able to run fast – he was unusually lax.

But these games are outliers and we saw in Qatar that Martínez is focused enough to contribute even when not playing regularly. He was left out of Argentina’s first game, that they lost; included for their crucial second, which they won against Mexico with a clean sheet; then came off the bench against Australia in the last 16, preserving his team’s narrow lead with a superb tackle before celebrating as if he had scored.

Never before, though, have players assimilating the unrivalled elation of winning a World Cup been subsequently hurled into the depths of an English winter and the unremitting grind of a truncated season. So Martínez must find a new kind of mental strength and the portents are good. When Scott McTominay messaged him after the final to offer congratulations, he responded by advising that “we go for the next one” and though words are easily delivered, Martínez is not one for idle chatter – just ask Mohamed Salah.