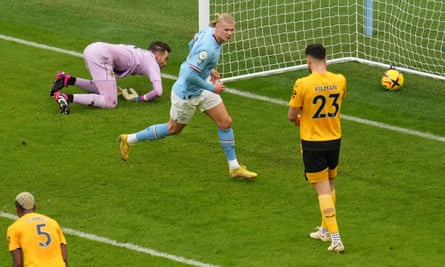 1) Striking duo offer a blast from the past

Fast-paced, tactically intricate and dramatic to the last, Arsenal v Manchester United was a heavyweight clash that lived up to its billing. It also showcased two models of centre-forward that were meant to be extinct: the old-fashioned target man and the old-fashioned poacher. Spearheading United’s attack, Wout Weghorst pressed with zeal and offered a focal point for United’s free-roaming wide men. It was his peeling run, drawing Gabriel to his left, that afforded Marcus Rashford the angle to blast home the opener. Nketiah pressed with similar intelligence but dropped deep when required to link with his midfield. Both his goals were straight from the school of the penalty-box predator, ghosting in at the back post to meet a cross and jabbing home a loose ball from practically underneath the crossbar. In the age of the all-round No 9, both these moulds of striker had supposedly been consigned to the past. Both players proved their worth in a match that certainly belonged to the present. Alex Hess

2) Thiago Silva shows he is a class apart

Mykhailo Mudryk sparkled on his Chelsea debut and Liverpool’s defending has improved with young Stefan Bajcetic in midfield, but a sterile game between two expensive mid-table teams was not one to linger over. Even Jürgen Klopp kept his press conference brief after a forgettable 1,000th match as a manager. A tribute to Thiago Silva it is then. Whether floating passes on to the toes of Kai Havertz or ushering Darwin Núñez where he wanted him to go, the 38-year-old defender was imperious at Anfield. As the millions pour in from Chelsea’s new owners, the free signing from Paris Saint-Germain remains vital for Graham Potter and an education for new recruit Benoît Badiashile, who is 17 years Silva’s junior. “He’s got a football brain that’s above pretty much everyone,” the Chelsea manager said. “Benoît will benefit from playing alongside Thiago. Everyone benefits from him. He’s a leader on and off the pitch.” Andy Hunter

3) Time for Ireland to move fast on Ferguson

For Declan Rice and Jack Grealish, read Evan Ferguson? Brighton’s scoring sensation qualifies to play for England by virtue of his mother. Might the nightmare scenario of a player who turned out for Ireland beating his chest on the Three Lions repeat itself? This time, it’s unlikely. Ferguson’s career is guided by his father, Barry, who was a trainee at Coventry where he met his English wife. Ferguson Senior is a former Ireland youth international who played alongside Damien Duff and Robbie Keane and a development worker for the Football Association of Ireland. Still, twice-bitten Irishmen are demanding national manager Stephen Kenny pick Ferguson for March’s Euro qualifier with France to close off any defection. A powerfully headed late equaliser – Fergie time, the next generation? – at the King Power was the latest demonstration of a talent Roberto De Zerbi admitted requires protection. “I want to help Ferguson grow up without too much pressure,” said the Brighton boss. Good luck. John Brewin

That Erik ten Hag has imposed his blueprint on this Manchester United side with remarkable speed is evidenced in the turnaround not just in their results but their style of play. The team presses with verve, passes with imagination and defends with resilience. But there is one area where they still look ripe for a mistake: playing it out from the back. It is clearly a non-negotiable for the former Ajax coach, but United do not quite have the personnel to pull it off. David de Gea has always looked awkward with the ball at his feet, while Luke Shaw and Aaron Wan-Bissaka are no-frills full-backs who will keep their winger quiet but can’t always play their way out of pressure. The goalkeeper and right-back gave up possession in the lead-up to Arsenal’s first goal, and it was through little fault of their own: they were acting on instruction. For the rest of the season, the players and their skillsets are unlikely to change. Perhaps the instructions should. Alex Hess

Pep Guardiola had several chances to offer contentment that Manchester City had thrown off his label of a “happy flowers team” after this latest show of scoring expertise from Erling Haaland. But, no: instead the manager made it clear there are still “details” missing. The good thing for Guardiola and City’s support is that elimination from the Carabao Cup allows the manager a clear week to work with his players. And that their next outing is Friday’s FA Cup game against Arsenal: as a primer for the Premier League clashes to come in February and April, this is a meeting to relish, and also gives Guardiola and his charges the best incentive to fix what is lacking. Expect then, under the lights at the Etihad Stadium, a barnstorming game that will offer a fair clue as to who might claim this season’s Premier League crown. Jamie Jackson

6) Is Wöber the answer for Leeds’ leaky defence?

Max Wöber replaced the Leeds captain Liam Cooper for his full Premier League debut for the visit of Brentford, a potentially tough gig for a team struggling defensively. Since arriving from RB Salzburg earlier this month, the Austrian has played at full-back, central midfield and the heart of defence, where he started alongside Robin Koch on Sunday. “His greatest strengths are his intelligence, his communication and his ability on the ball,” Jesse Marsch said. “He is probably the best passing centre-back I have ever had.” The 24-year-old showed why Marsch has so much faith in him as he kept Ivan Toney quiet for almost the entire 90 minutes of a goalless draw. Wöber even came close to scoring with a free-kick from the edge of the box. The defender’s performance will leave Marsch with a selection headache when captain Cooper returns to fitness but the head coach will not mind that. Will Unwin

“When you spend millions, you move faster to where you want to be, so, of course, they’re doing really well,” was Patrick Vieira’s assessment of Newcastle’s rapid progress up the table this season after Crystal Palace’s third 0-0 draw against them in 141 days. But even after forking out £85m – the same as Manchester United paid for Harry Maguire – to recruit the Premier League’s meanest defence, to have conceded only 11 goals at this stage of the season is still an astonishing achievement for Eddie Howe’s side. While Chelsea’s Premier League record of 15 from 2004/5 may be beyond them with 18 matches still to play, Howe is hoping to add forward power to his squad to build on their solid foundations. “We’re keen to do business and keen to bring a player that can hopefully help us but as we know in this window, there are no guarantees that will happen,” he said. Ed Aarons

West Ham are far more dangerous when Jarrod Bowen is chasing down lost causes and bursting into goalscoring positions. David Moyes’s chances of keeping his job will be far greater if Bowen continues to play well. The winger has not had an easy season but his performance during West Ham’s win over Everton was a return to last year’s high standards. Bowen, who was left out of England’s World Cup squad, gave Everton’s defence a torrid time. He kept snaking into space down the inside-right channel, confusing Vitaliy Mykolenko and James Tarkowksi, and scored two poacher’s goals. This was Bowen rediscovering the levels that saw him score 18 goals last season. He was hungry after failing to find the back of the net since 13 October and punished Everton in ruthless fashion. West Ham will want more of that from Bowen as they look to pull themselves away from danger. Jacob Steinberg

9) Ward-Prowse playing as a one-man team

James Ward-Prowse thought he had done it again. So did Nathan Jones, who punched the air gleefully. But after a VAR review Ward-Prowse’s second-half strike was ruled out for a foul in the buildup. Inevitably, Southampton would soon trail, and ultimately would lose. In Jones’s six league games, Saints have scored five goals. Ward-Prowse has four, and the other came nine minutes into Jones’s reign. That time, at Anfield, Ward-Prowse provided for Ché Adams. Clearly Ward-Prowse is finding the No 10 role to his liking. A relegation battle necessitates short-termism, but the line between reliance and over-reliance is a fine one. Ward-Prowse can lead the fight. But he cannot battle alone. Sam Dalling

Sam Surridge received a round of applause in the Nottingham Forest dressing room after scoring the first Premier League goal of his career to secure a draw at his former club Bournemouth. Unwanted by Stoke in January, Forest snapped him up to provide energy for their promotion chase. Surridge’s eight goals made him look a successful investment but when the summer was spent recruiting more notable strikers, one could be forgiven for thinking the former Swansea player would be shipped out. He is well regarded at Forest for his hard work and attitude, which might explain why he was on the bench at Bournemouth over Emmanuel Dennis, an expensive arrival from Watford who has struggled to get a place in Steve Cooper’s side. He is not deemed to be one of the best 20 players available now, an indication that talent is not everything. Will Unwin