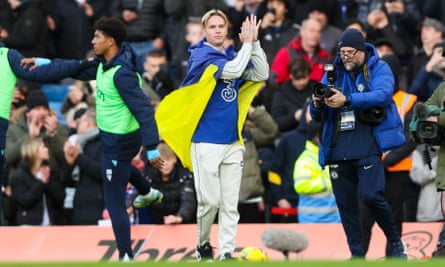 There is a telling moment in Apple TV+’s punchy new documentary, Super League: the War for Football, in which the head of La Liga, Javier Tebas, gives a withering assessment of those who seek to control the modern game. “You have to keep up the fight,” he growls. “Money is not everything. Far from it. The rich don’t have the same ethical standards. There’s lots of liars and fakes. Betrayals happen all the time. Loyalty is practically nonexistent. I’ve never trusted anyone.”

Tebas has a lawyer’s mind and a pugilist’s love of a ruck. It is a healthy combination, and football is the better for it. Without him, as well as the Uefa president, Aleksander Ceferin, and Paris Saint-Germain’s president, Nasser al-Khelaifi, the European Super League might well have become a reality. Now, however, he has a fresh target in his crosshairs: the Premier League.

On Thursday Tebas warned that the Premier League was not financially sustainable – before promising to fight the rules that allow English clubs to “distort” the transfer market by spending huge sums despite making losses.

His comments were typically belligerent but they were based on numbers to make the eyes water. Last summer Premier League clubs spent a combined £1.92bn on transfers – about the same as the other big five European leagues combined. As if to further make Tebas’s point, over the weekend Chelsea signed Shakhtar Donetsk winger Mykhaylo Mudryk for £83m – having already spent £60m on Benoît Badiashile, David Fofana and Andrey Santos in the January window and £278m last summer.

Are such figures preposterous? Definitely. Do they make people queasy? Absolutely. But is the Premier League becoming more financially unstable? Well, no. In fact, that’s the intriguing thing here. The bubble doesn’t look about to burst; rather it appears armour-plated.

The bald reality is that the Premier League is able to spend far more because the gap between it and other leagues is growing. Last season it broke the £10bn barrier for broadcast and commercial revenue for the first time, while stadiums operated at 97% capacity. And, notably, while transfer spending was up in the summer, as a percentage of turnover (32%) it was in line with the league’s last commercial cycle in 2019 (30%).

Just as important, the Premier League remains football’s equivalent of the Mos Eisley Cantina in Star Wars, with sheikhs, oligarchs, oppressive regimes and hedge fund managers all keen to do business – however uneasy that makes some fans feel, and whatever the consequences for their clubs.

But it’s not just the biggest seven Mos Eisley Cantina English clubs where the money is flowing. Staggeringly, Everton and Wolves now have higher revenues than the seven-time European Cup winners Milan, according to Deloitte’s latest football list, while Southampton earned more money than Napoli, who are galloping away with the Serie A title.

These numbers are discombobulating, for sure. Yet they show just how much of a financial monster the top flight of English football has become.

The Premier League insists this hasn’t happened by chance but by design, based on how it distributes its wealth. Last year Manchester City earned £161.3m in prize money and broadcast revenue, while the worst performing team, Norwich, made £100.3m. That ratio of 1.6-1 is lower than other leagues in Europe – and has been for decades – leading to knock-on effects that benefit the league.

Look at this season. Yes, City may have won four of the last five titles, but a fifth is by no means a given. Liverpool and Chelsea are struggling. And, as Fulham, Brighton and Brentford have shown, anything is possible on a given weekend. When compared with the muscular domination of Paris Saint-Germain in Ligue 1 and Bayern Munich in the Bundesliga, English football is more competitively balanced.

Of course, those English clubs in the Champions League retain a massive advantage. But at least the financial distribution in the Premier League allows smaller teams to have the funds to sign good enough players to keep matches competitive and fans to dream. That, the league maintains, then leads to greater unpredictability and fan interest across the globe, followed by increased TV and commercial revenue the next time contracts are up.

There’s a flipside, of course. England is also where fans’ loyalty is juiced to the pith, where the flimsy owner and director’s test has allowed unsavoury regimes and characters in, and where many in the lower leagues are desperately struggling, especially since Covid struck.

There is a reason why so many agree with Tracey Crouch’s fan-led review, which has called for the creation of an independent regulator “to ensure financial sustainability of the professional game”, alongside greater powers for fans and an improved owners’ and directors’ test. And why her call for the Premier League to support wider football to an even greater level is readily backed.

But this doesn’t negate the central point. For while Tebas’s heart is in the right place when it comes to football’s finances – not least because he has to deal with Real Madrid and Barcelona, petulant twins for whom nothing is good enough – there is little evidence that the Premier League is heading for a fall.

It has pushed on through Brexit, the cost of living crisis and the threat of the Super League. And with Qatar recently confirming it wants to invest in a big English club, and Manchester United and Liverpool likely to be sold for billions this spring, the Premier League continues to carry the decadent scent of the Roaring 20s.