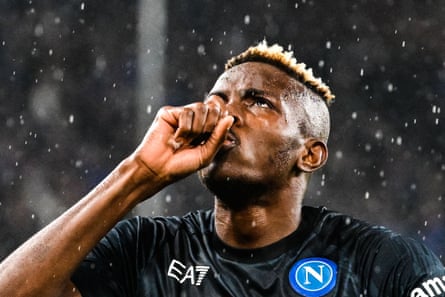 The match was over but nobody wanted to go home, as if leaving this place meant letting go of him. To stay was to hold on a little while longer. One more time, Sampdoria’s supporters at the Marassi started to sing. “Luca Vialli, Luca Vialli, Luca Vialli alé alé, we love you and we adore you, you are better than Pelé.”

There was no malice toward the Brazilian here, no intent to disrespect the memory of a player who died at the end of December. This has been their ode to Vialli for decades, since he was a twentysomething firing Sampdoria toward unprecedented successes – a Scudetto, three Coppa Italia triumphs and the Cup Winners’ Cup.

Such glories feel a very long way off now for a club which finished 2022 second-from bottom in Serie A, having scored a paltry six goals in 15 games. They were, and still are, the only team in the division yet to reach double figures.

Optimism had been raised by a 2-1 win over Sassuolo to start the new year but was quickly checked by Napoli on Sunday. Not even Emil Audero’s early save of a Matteo Politano penalty could knock the leaders off their stride, Victor Osimhen converting Mario Rui’s cross to put them in front in the 19th minute. A red card for Tomás Rincón before half-time effectively ended the contest. Napoli did not extend their advantage until the 82nd minute, when Eljif Elmas buried another spot kick, but nor did they ever look like conceding.

Avoiding relegation will be no small task for Samp. They had gone 397 minutes without a goal before Manolo Gabbiadini’s opener against Sassuolo and the eye-catching nature of that strike – an overhead kick – almost felt indicative of the struggle. If the only way you can get the ball in the net is with an act of individual inspiration, then you likely will not be doing it very often.

They have been active already in this transfer window, adding Sam Lammers on loan from Empoli to bolster the attack, as well as right-back Alessandro Zanoli from Napoli and centre-back Bram Nuytinck from Udinese. The latter, in particular, has played well in both appearances so far, but these arrivals are offset by departures. Zanoli was a makeweight in a deal that sent starting defender Bartosz Bereszynski in the opposite direction. Likewise, Lammers arrived as part-exchange for Francesco Caputo – Sampdoria’s top scorer last season.

Sunday was not the day, though, for sporting inquests. Before kick off, the Sampdoria manager Dejan Stankovic had stood together with Sinisa Mihajlovic’s sons as the club honoured their father, who spent four seasons at the Marassi and died last month, together with Vialli. Players laid wreaths beneath the southern stand and warmed up wearing the Italian’s old No 9 shirt.

Fans produced choreographies for each club icon in turn. “An example to football, the history of this shirt … Thanks Sinisa,” read the message for Mihajlovic. The tribute to Vialli ran: “Bomber, Champion, Legend: thanks to you we know nothing is impossible.”

It was left to other teams to prove that last point, during a weekend packed with dramatic late goals. On Saturday night, Luca Caldirola had scored a 92nd-minute equaliser for Monza against Inter – whose academy he grew up in. The Nerazzurri were furious, pointing to a premature and incorrect whistle that stopped them from going 3-1 ahead in the 80th minute, but theirs had been a disappointing performance so soon after last week’s win over Napoli.

Lazio threw away a second-half lead for the second time in five days, contriving to draw 2-2 against Empoli after having led 2-0 in the 83rd minute. It was, according to Opta, the first time since 1943 that they had blown a two-goal advantage inside the last 10 minutes of a Serie A match. After the midweek reverse against Lecce, it was enough to leave the manager feeling cursed. “If a satellite fell from the sky right now,” said Maurizio Sarri, “it would fall on Formello [the town where Lazio have their training facility].”

Worse yet for his team’s fans, they had to watch Roma perform the reverse trick on Sunday night. The Giallorossi had been dreadful for most of their game at Milan and trailed 2-0 in the 87th minute. But a thumping header from Roger Ibañez, previously at fault for both goals his team conceded, brought them back into contention. Tammy Abraham earned a draw with a close-range volley in injury time.

It has been a bright start to 2023 for the Englishman after a frustrating first part of the campaign. Abraham began on the bench against Bologna on Wednesday but came on to make a crucial header off the line as his team defended a 1-0 lead. He started on Sunday at San Siro and rewarded his manager’s faith by reacting quickest to Ciprian Tatarusanu’s parry from a Nemanja Matic header.

Draws for both Milan clubs were great news for Napoli, who re-extended their lead at the top just days after seeing it trimmed by defeat to Inter. The only team among the chasing pack to win this weekend were Juventus, who climbed to joint-second with a 1-0 win over Udinese – their eighth consecutive victory and clean sheet.

The Bianconeri, like Milan, are seven points behind the leaders for now but will get their shot at reopening the title race when they visit Napoli on Friday. The timing feels auspicious for Juve, with Federico Chiesa back from injury and serving up the assist for Danilo’s winner on Sunday.

Their supporters, too, sang songs for Vialli, remembering the trophies he won in a black-and-white shirt. He was the man wearing the captain’s armband when they last conquered Europe, beating Ajax in the 1996 Champions League final.

Vialli’s first club, Cremonese, will wear a special shirt with his picture on the left sleeve when they face Verona on Monday evening. These will be auctioned off afterwards to raise money for the foundation he set up together with Massimo Mauro, supporting research into improved treatment for sufferers of amyotrophic lateral sclerosis.

“Luca will be present in our hearts and on our shirts,” read the Cremonese statement announcing the initiative. And no doubt also in the voices of supporters, not least because he always considered himself to be one.