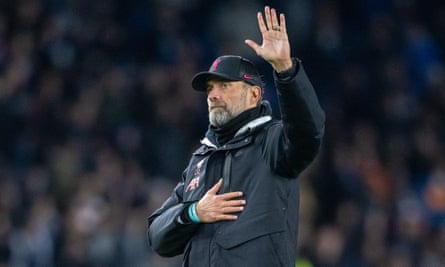 It was at the very end of Jürgen Klopp’s post-match press conference at the Amex Stadium on Saturday that he was asked the question most people in the room were probably thinking about asking themselves: was his decision to take off Jordan Henderson, Fabinho and Joël Matip as part of a quadruple substitution midway through the second half symbolic of this Liverpool team being past it?

“It’s our fault you can ask this question, I understand it, but the changes have nothing to do with that,” Klopp said with characteristic defiance, but ultimately his demeanour gave him away. Head bowed, voice lowered, concern etched across his face; the German, quite clearly, recognised his side’s loss to Brighton being as noteworthy as it was emphatic.

Indeed he ranked the defeat as probably the poorest of his coaching career, which was saying something given Borussia Dortmund flirted with relegation during his final season there. But equally what he said did not come as a shock given how bad Liverpool were. Clueless, lacklustre and limp, with the manner of their display especially startling given they had a full week to prepare. In the end it appeared as if those in red had barely spent an hour together before travelling to the south coast.

And so the downward spiral of a great team continues and it is hard to know where to begin assessing what has gone wrong. For sure there has been a hangover from last season’s gruelling and ultimately devastating pursuit of the quadruple, something the manager admitted to last week. Poor results have also, quite clearly, hit confidence, with injuries hardly helping matters. But the malaise runs deeper than that, and nowhere more so than in midfield.

It has not been up to scratch all season, failing to provide the aggression, athleticism and dynamism required for the team to function properly with a high line and high intensity. The rhythmic drumbeat of Klopp’s heavy-metal football has been distinctly unharmonious for months and the fundamental impact of that has been opposition sides being able to create openings against Liverpool with regular ease. Going into Saturday’s game they had offered 51 big chances to their opponents across 17 league games this campaign, with only Leeds and Fulham having a worse record.

Brighton became the latest team to pass and run their way through Liverpool at will and while, as Klopp stressed, the visitors need to take collective responsibility for that, it was again the men in the middle whose failings stood out most and felt most telling. Thiago Alcântara was largely ineffective in a more advanced role while Henderson and Fabinho were completely overrun as a double pivot, unable to press effectively or chase down any player in blue and white once they got past them, which in turn put a strain on Liverpool’s defence that proved too much to bear on three occasions in the second half. The end result took the number of league goals conceded this season to 25, the most after 18 league games under Klopp.

To put it bluntly, Henderson and Fabinho looked like old men playing a young man’s game, which to an extent they are – 32 and 29 years old respectively – and having endured the relentless exertion that comes with being long-standing midfielders in a Klopp side. They have given everything in the pursuit of success and this season it appears to have caught up with them. In that sense their substitutions at the weekend did feel symbolic; a nod to the end of one era and the need for another to begin.

It could be argued that Liverpool should have seen this coming and that their failure to sign at least one high-quality midfielder last summer was an act of negligence. In fairness, the club wanted Aurélien Tchouaméni but Real Madrid beat them to the France international’s signature. However, there should have been alternative plans in place, and given Liverpool’s worsening hopes in regards to finishing in the top four it is more than a surprise a midfielder is unlikely to be signed in this window either, with a move for the No 1 target, Jude Bellingham, to take place in the summer at the earliest. A growing number of fans blame Fenway Sports Group for the current inertia, deeming it an owner who wants to sell up and won’t spend the required and available funds on transfers while it remains in situ.

All is not well at Liverpool and the task for Klopp, beginning with Tuesday’s FA Cup replay with Wolves, is to change the mood at a club that had been happy for so long. For that to happen he needs to make changes to his side and there is no more pressing place than at the very heart of it.