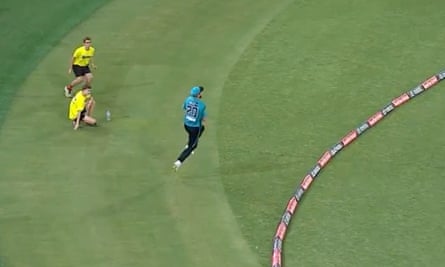 The latest iteration of the laws of association football is 26,868 words long. Despite having to deal with variations for sevens and 10s, rugby union manages to deal with its laws in 22,480. Including field and equipment specifications, hockey sticks to 11,408 words. The latest playing rules of the Darts Regulation Authority amount to barely a third of that, treble-topping out at 4,275 words. The part of the International Weightlifting Federation’s rules that actually concerns lifting weights weighs in at a mere 1,325 words, clean and with minimal evidence of jerks. And so on, all the way down to the World Rock Paper Scissors Association, which requires only 62 words to explain the finer points of its game, those involved having perhaps learned from bitter experience the potential ramifications of overusing paper.

Every sport has its nuances, it’s just that some have more than others. Cricket, a sport in which a single game can last five entire days, has a bit extra to cover, and, as updated last September, its regulations finally run out after 34,602 words. Add the preface and indices and the entire document hits 37,827. Used wisely, these are enough words to create an entire world – CS Lewis needed just 594 more for The Lion, the Witch and the Wardrobe. It is almost exactly half as long as Harry Potter and the Philosopher’s Stone (but 52 times the length of the conversation between Potter and Oliver Wood which establishes the rules of quidditch), and represents 42% of The Handmaid’s Tale. Like those novels, it attempts to conjure its own, fully-realised alternate reality. But unlike them, no editor intervened when the authors’ imagination ran a little out of control.

Over the years cricketers, with their underarm-bowling, aluminium bat-wielding ways, have tugged at every stray thread their rule-weavers left dangling, repeatedly forcing them back into action to repair the damage. But we have now reached the point where pretty much all imaginable things are explicitly covered. Take, for example, Law 19.5.1 subsection four: “A fielder is grounded beyond the boundary if some part of his/her person is in contact with another fielder who is grounded beyond the boundary, if the umpire considers that it was the intention of either fielder that the contact should assist in the fielding of the ball.”

This is the part of cricket’s laws that specifically deals with the possibility of one fielder standing on the shoulders of another, or perhaps being tossed into the air like a gymnast from a human pyramid, while both are outside the field of play, collecting the ball, and being carried back inside the rope before returning to earth and claiming to have taken a fair catch. At some point a committee has convened in one of the splendid wood-panelled rooms within the Lord’s pavilion to specifically debate the possibility of a captain, with at least 12,000 square metres of grass to defend, deciding not just to place two of their fielders outside the field entirely but also choosing to put one on top of the other.

The image conjured by the following paragraph is better still. Here we learn that “a fielder who is not in contact with the ground is considered to be grounded beyond the boundary if his/her final contact with the ground, before his/her first contact with the ball after it has been delivered by the bowler, was not entirely within the boundary”. This is where our brave team of lawmakers established whether a fielder can catch the ball inside the boundary, throw it back into the air, catch it again beyond the boundary, throw it back into the air again, repeat the process as many times as they fancy, and the batter still be out. Which they very much can, so long as, whenever they are in contact with the ball they are also airborne. As New Zealand’s Jimmy Neesham put it, upon becoming aware of this law a few years ago: “So I can just endlessly jump up and down on the spot over the boundary patting the ball up in the air until another fielder runs over to me, then tap it to him? Well then that’s stupid.”

These are laws potentially unique in all serious sports, in being very specifically conceived and worded to be as silly as possible. And while the chances of the first ever being needed seem remote, last weekend, in Australia’s Big Bash League, Brisbane Heat’s Michael Neser executed a boundary-straddling double-leap juggle-catch to dismiss Jordan Silk and remind the world of the absolute absurdity that is Law 19.5.1 subsection five.

Two days later, in the same competition, Tom Rogers was saved from being run out at the non-striker’s end – Mankaded, if you will – because the bowler’s arm had gone beyond the vertical before he turned to knock off the bails (law 38.3.1), a nuance that the bowler himself, Australia’s Adam Zampa, 30-year-old veteran of 148 international matches, had previously been completely unaware of. Then on Friday in Karachi, Pakistan stood 15 runs from victory, one wicket from defeat and one way or another no more than 20 minutes away from concluding a compelling Test against New Zealand with a result, one both teams had spent five full days striving to achieve, when – and despite the presence of floodlights that allowed everyone involved to see just fine – the umpires called it a draw because, somewhere else, it was getting a bit dark (Law 12.9.2).

If anything could be seen even more clearly than the floodlit handshakes as play ended unsatisfactorily it was that, however long cricket’s laws already are, they remain very much unfinished. Perhaps that committee should expedite its return to their fusty wood-panelled room in St John’s Wood, and, ideally, be a bit more serious this time.