Last month, Twitter rolled out its new view counter display on all tweets, providing more context as to the reach and exposure of tweeted content.

And while some people have found the additional insight of value, many had also criticized the format, with view counts getting top-billing, and messing up the balance of tweet metric displays. 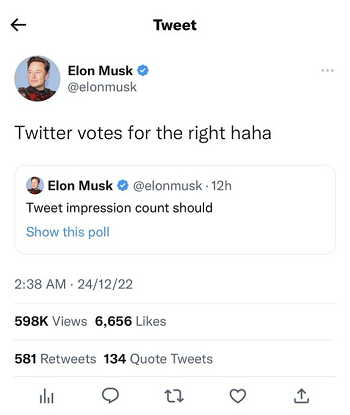 Twitter is listening, and today, it’s launched an updated display, with view counts moved to the right of the tweet metrics listing.

Many of you didn’t like seeing view counts on the left. We heard you. View counts will now show on the right side of your Tweet, located between the Like and Share icons. Live on web, iOS and Android coming soon!

Which is a pretty simple, and improved solution, which still displays total tweet impressions, and doesn’t convolute the existing tweet UI.

Though there is still a question as to whether it’s a valuable addition.

Twitter has actually tried showing view counts several times in the past, including in September last year, just prior Elon’s takeover at the app. Those experiments didn’t yield great results, or help to improve tweet engagement – and why would they? Why would the knowledge that a thousand people saw your tweet and ignored it encourage you to keep tweeting?

In any event, Elon seems to believe that it’s a winner, and that showing people that their comments are actually being seen will encourage activity.

I mean, probably not, but who knows – and as with all of Twitter’s new experiments, Musk seems determined to find out for himself what will or won’t work, as opposed to trusting past research or assumptions.

That makes sense too, I guess, at least in some contexts, and we’ll soon find out whether people care about their tweet reach or not, and whether that gets more people tweeting.